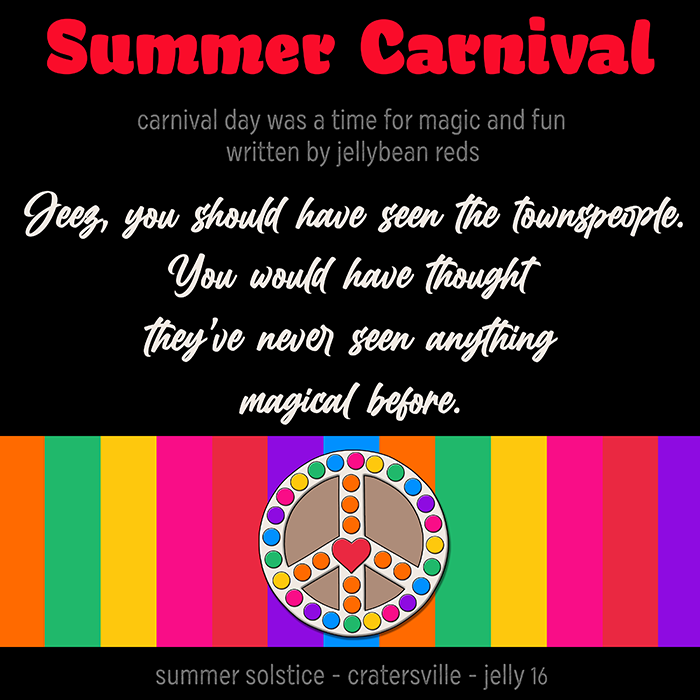 Cratersville held four carnivals during the year. Each carnival fell on the day-of-the-changing-season.

My family never missed a carnival. When Poppy and I were younger we played the happy tourists, exploring various booths, rides and entertainment venues.

It was at the summer carnival before seventh grade, our touristy ways gave way to participating in the production.

My sister Poppy, being well versed in Wanderlore ways, decided to set up a booth where she would share a seasonal craft with the fine folks of Cratersville. She dressed in Wanderlore attire which naturally drew the crowds.

I helped out at Poppy’s booth. We started out demonstrating the many uses of herbs, gourd carving, rock painting, tea infusing, snow-globe making, quilling and other such things.

Over time we added the finer points of identifying magical creatures, simple spell casting and charm-making to our repertoire.

We figured since no one had access to the magic we had that we didn’t have to worry about any members of our audience actually using the magical tricks we taught them. It was just for entertainment, so no big deal—right?

The summer carnival before tenth grade saw me strike out on my own. I too, had a little magic I wanted to share. My booth didn’t feature demonstrations. Instead, I sold trinkets and kaleidoscope canvases featuring my designs.

Each of these designs was imbued in some way with a touch of magic. Again, I didn’t think anything of using my magic for non-magical purposes. Why should I have the magic all to myself?

The following summer carnival, a new booth went up on the edge of the carnival. At first no one noticed, but by afternoon the booth was booming with business.

I asked Blueberry what all the hubbub was about when he came by to drop off my birthday card and present. My birthday coincided with the summer carnival most years, this year being one of them. I knew there would be a party with my name on it later that night. I would have asked Blue for details, but he was always sworn to secrecy.

“Jeez,” Blueberry said, “you should have seen the townspeople. You would have thought they’ve never seen anything magical before.”

That caught my attention. “Magical?”

“The little creatures,” he continued, “They’re selling these gems. Everyone says they’re magical. I think it’s all hokum, but that’s just me.”

I would have asked more, but I knew that Blueberry wouldn’t get near anything magical if he could avoid it.

After the summer carnival ended, I packed up and left for the parking lot where Blueberry was scheduled to pick me up.

On the way, I decided to swing by where the little creatures had set up their booth. I wandered around a bit, but saw no evidence of them having been there until, amongst the scattered litter, something sparkling caught my eye.

I picked the crystal up. It was pretty and it had an eerie rainbow glow, but other than that, I felt nothing magical about it.

Perhaps, Blueberry was right. Maybe all the little creatures offered was hokum. Then again, maybe there were things about the Magic that I just didn’t know.