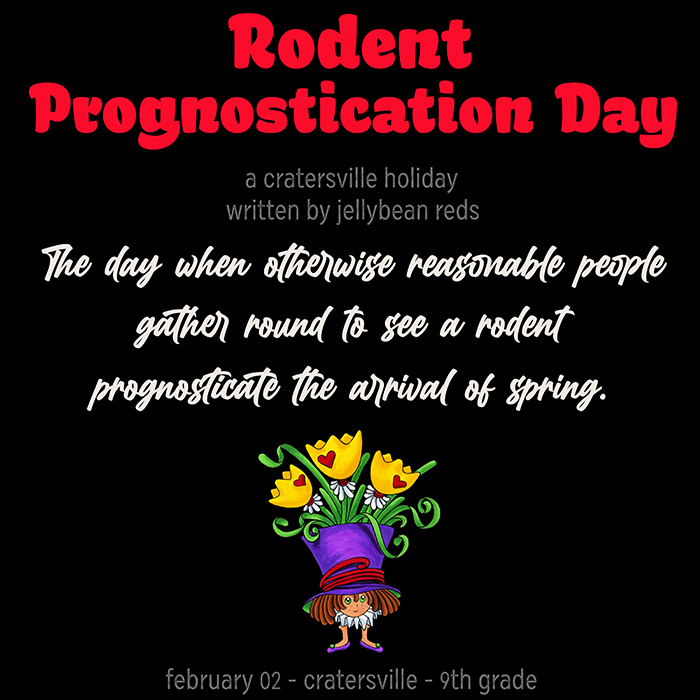 Happy Groundhog Day! The day when gobs of otherwise reasonable people, gather in the cold, awaiting that magical moment when a quaintly garbed gentleman pulls a bleary eyed rodent from its burrow in order to prognosticate if there will be an early spring or not.

I first discovered this quirky day back in high school when I had plenty of time to spend searching the great cloudy web known in my world as the Celestial Warehouse for esoteric tidbits, shady historical facts and funny animal videos.

The first thing I thought of, upon seeing the rodent-themed festivities, was that no one would go for that sort of thing here. Cratersville may have been built upon retro-futuristic stylings of 1950s Americana, but some antics are just too weird even for the denizens of our quirky town to believe—especially since our weather is programmed a year in advance.

This didn’t stop me thinking, though, that a variation on the theme might actually give our town something exciting to look forward to each year, and, since I had backdoor access to the official calendar of Cratersville, I didn’t need to alert the town ahead of time. I could just add it, and everyone would be notified when and where to show up.

Of course, my calendric manipulations never went off without some kind of hitch, especially when I’m using my Creation Book to make them happen.

Thus, the big day came, and the townsfolk were gathered around a small wooden stage with a trapdoor I had erected over a crater. The craters of Cratersville were natural emerging points for creatures created by the Magic.

I could tell from the buzz of the crowd that no one knew what to expect. I had labeled the event as Prognostication Day, hoping that the lack of any specifics would add to the surprise.

Like I said earlier, rodents weren’t going to get the respect of the townspeople, so I enlisted something a bit more attention getting. Now, I hadn’t intended for all hell to break loose, but the bear that I had programmed to emerge and read the weather forecast in mock Shakespearian verse wasn’t exactly as tame as I had hoped.

Perhaps, the Magic knew that a bear wasn’t much more exciting than a rodent if it acted all tame and stuff. Either that or the bear was just really pissed off that I had decided to put a lace ruff around its neck.

Either way, it was kind of funny to see how fast people could run when there was a big growling bear after them. It was even funnier that they weren’t all that mad at my blunder since no one was eaten. In fact, they couldn’t wait to do it again the following year—this time with the addition of a small obstacle course, along with a few carnival rides and a food tent or two.