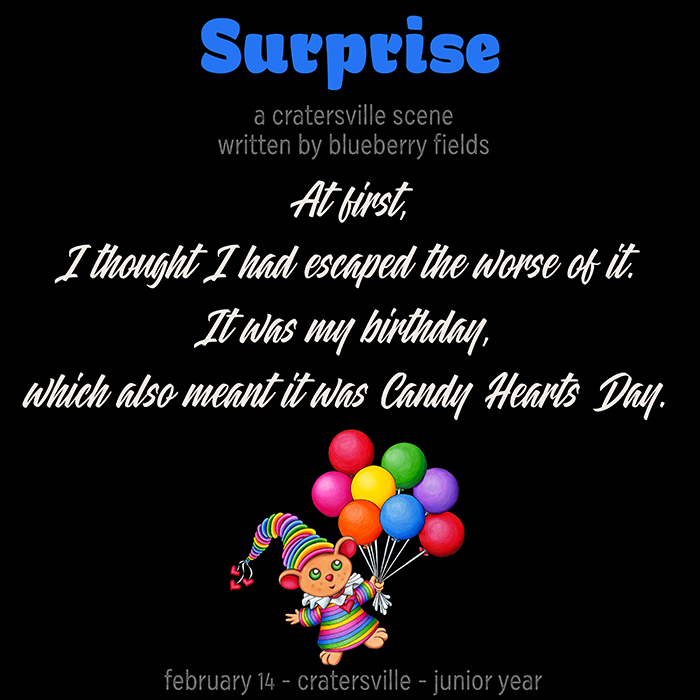 At first, I thought I had escaped the worse of it. It was my birthday, which also meant it was Candy Hearts Day.

My birthday flew under the radar with nothing more to show but a lopsided cupcake—heavily frosted—which was waiting for me in my locker when I arrived at school. The cupcake was from Jellybean. I scarfed the offering quickly. I hadn’t had breakfast, so the sugar-rush wasn’t totally unappreciated.

I also got off easy in the “valentine” department, having received just three cards. One was from my twin sis Bluesy—don’t get any ideas. Another was from Jelly’s sis Poppy—she teases me. The third was from Jelly—they* don’t.

After school, Bluesy and Jel hitched a ride in my starcar.

Jel had a smile on their face—which made me nervous. Bluesy, didn’t seem all that innocent either, but it was her birthday too, so I just thought she was giddy over all the gifts she got. The gifts were in the backseat—none of them from me.

After dropping Jel off at their dad’s theater and unloading my sister’s trove at home, I raided the fridge and went to my room. I turned the knob and gave a push. The usually compliant door, opened just enough for a single red balloon to exit.

I should have turned around. I should have walked the other way. Instead, I forced my way into the room and was met by a demonic clown’s dream.

I suppose I should have been flattered. But I wasn’t. My one and only thought was how to rid my room of the celebratory infestation—and pronto.

The balloons must have picked up on my ire, for as soon as the thought had entered my mind, the balloons began to pop.

The loudness of their bursting surprised me—I was doubly surprised when I realized that metal pieces were being blasted all around the room with every explosion. I had to duck a few times to avoid some of the larger incoming bits. I didn’t dive underneath my desk—that wouldn’t be cool.

When all was said and done, my room looked like a carnival war zone.

I hate surprises, but a self-destructing surprise was definitely something I could get into.

Kneeling down to inspect the debris, I realized that Jellybean had another surprise up their sleeve. The fragments weren’t just miscellaneous bits of metal, but gears, springs and other purposeful pieces.

Since Jellybean wasn’t into creating clockwork creatures like their mom or sister, I wondered if the whole balloon production was just a ruse to get me to put together a school project for them, or if they had something else planned.

After returning my room to its previous unkempt but latex-free configuration, I discovered a card poking out from under one of the model spaceships I kept on my desk. The card didn’t have a greeting or image on it. Instead, it featured a series of drawings for assembling the clockwork pieces that had just bombarded my room.

I hesitated at the challenge. Apparently, Jellybean had another surprise to spring on me.

In the end, my curiosity won out. After a week and some change, I had a little tin teddy bear in my possession. The funny thing was—considering the complexity of its clockwork—there was no key to wind it and no other animating feature I could detect, only a single empty chamber where its heart would go.

The next day, when I opened my locker at school, there was a small black box sitting on my textbooks. I pocketed the box without opening it. I already knew what was inside.

When I got home, I confirmed my suspicion. There, wrapped in night blue paper was a single ruby red heart. As I held it in my hand, I could feel the magic it contained. I didn’t know if the magic would cause the little tin bear to detonate or to come to life.

*they as in not she and not he—get used to it.