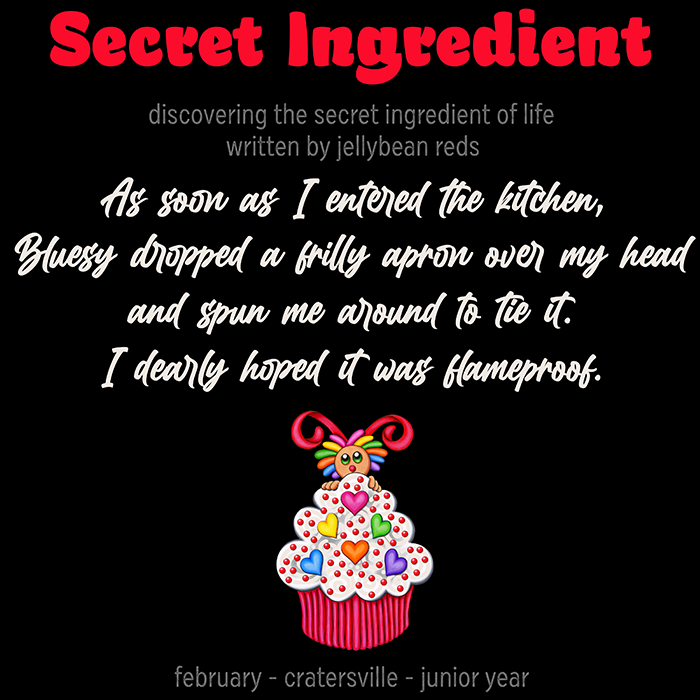 I’ve written many times about my lack of cooking skills. I can heat up water for tea. I’ve gotten pretty good at making a seasonal loaf of bread, which—for me—are more like glorified cakes than real kneaded, shaped and risen creations. But, that’s about it.

My journey to semi-literacy in the kitchen didn’t come easy. In the Wanderlore Grove, where my mom spent most of her time, she participated in communal cooking at a centralized dedicated pavilion.

My sister, Poppy, liked being around the hecticness involved in cooking for large groups. I, on the other hand, stayed on periphery watching the goings on, but never really knowing how to jump right in like Poppy always seemed to do.

Sometimes, I would be prompted to join in with some simple task like slicing or dicing. Other times, I would be tasked with taking things from preparation area to hearth or hearth to table. For the most part, I enjoyed helping, though the production as a whole always left me feeling woefully out of my element.

As I grew older, I spent less time in the Wanderlore Grove and more time in the little town of Cratersville where my father had his theater.

The theater had a small lounge area where the stage hands and other theater personnel would hang out, sip coffee and exchange gossip. There were no microwaves in Cratersville. You had to go to a later era town for one of those. Electric coffee makers were considered out of era too, although electric percolators were allowed.

Dinner or lunch was usually had at a local eatery. On the rare occasion we stayed at our house that wasn’t a home on the outskirts of Cratersville, we had robotic creatures designed by my mom to do whatever cooking we needed.

Therefore, in February, during my junior year of high school, I decided I needed to inform myself about the basics of cooking. Home Ec class wasn’t for me so I enlisted the help of Blueberry’s sister, Bluesy, to teach me kitchen survival skills with the hopes that I could actually cook for myself, if need be, in the future.

I explicitly told her I wasn’t looking for “domestic goddess” training, but something more along the line of simple dishes that I couldn’t screw up.

Bluesy, looked pensive as I relayed my requests. I don’t know if she was worried that I was setting myself up for single status all my life (a strange concept to her sensibilities) or if she was thinking that her brother needed to have someone who was better skilled in the kitchen if we ended up getting married (she was already planning the reception).

Whatever her worry, she agreed to teach me how to master the rudimentary areas of kitchen life; roasting, baking, boiling, stewing.

Our first lesson was scheduled for the Saturday before Valentine’s Day, so she chose cupcakes as the day’s theme. As soon as I entered the kitchen, Bluesy dropped a frilly apron over my head and spun me around to tie it. I felt all of six years old for that was the last time that I had worn such a feminine confection (I dearly hoped it was flameproof).

She showed me how the kitchen was arranged and what all the implements were that we would be using. I already knew the identity of most of the items, though it was helpful to see how they differed from the utensils and things that the Wanderlores used.

Once I was familiar with everything, Bluesy handed me an index card with a recipe written upon it in small, very legible script.

I immediately understood that I would be the one doing all the heavy mixing.

The first thing she told me was that we would be doubling the recipe. Of course, doubling wasn’t really doubling. Some things needed a bit of adjusting outside of the basic “times two” that I had been envisioning in my head.

I asked Bluesy why she just didn’t write out the recipe that way. She said that once you got the hang of it you just knew how the ingredients should be measured out depending on how many cupcakes you wanted. I doubted that I would ever be at that level, but I didn’t say so. I let Bluesy live with her fantasy of “Jelly, cupcake maker in chief” and moved on.

After I had finished measuring, adding and stirring, Bluesy decided to go all rogue on the recipe and threw in a couple of handfuls of chocolate chips. She said that the chocolate chips worked well in this recipe but that they don’t work as well in some of the other recipes she has.

I really wasn’t sure if she meant that chocolate chips wouldn’t go well with other flavors like lemon or strawberry or if there was some kind of alchemical reaction that I should be worried about.

Just then the phone rang in the other room. Before Bluesy left to answer it, she tossed me a package of cupcake liners. I dutifully lined the cupcake tins as I listened to her cheerful chirping through the door.

I have a feeling Bluesy would have had the cupcake tins all lined and ready to go before she even began mixing the ingredients. Probably right before she preheated the oven. I must have thrown her off her game.

After I finished, she still hadn’t returned. Looking for something to do, I dipped my finger into the batter and had a taste. It was good, but it still seemed like it was missing something, some little dash of this or that I’m sure Bluesy would have added if she had been the one executing the recipe and not me.

Now I don’t know if the Magic read my mind or if my desire to know Bluesy’s secret ingredient was strong enough to bring forth its revelation, but as I stuck my finger into the batter to take another taste, a tiny creature no taller than one of those impossibly proportioned, dress up dolls ran up to the bowl and sprinkled a handful of tiny rainbow hearts into the batter.

The hearts dissolved like liquid love. At once, it dawned on me what was missing.

The door swung open, heralding Bluesy’s return. I turned my head, asking what had taken her so long.

Of course, by the time I looked back, the little creature was long gone. I wondered briefly if I should mention its appearance to Bluesy, but then again, I thought that some things should remain a secret.

Speaking of which, I don’t think I have to tell you what Bluesy’s secret ingredient is. But, in case you don’t know, let me share the biggest lesson I got from my first baking lesson.

I learned that when you love to do something and you have a natural instinct on how something works, whatever you make—be it a cupcake, a flower arrangement or a home—it can’t help but be infused with the love you put into it and the little extra touches that you can’t help but make.

You can’t capture it in a recipe, but you can sure taste it when it’s there, and you can definitely tell when it’s not.

Now that’s a secret worth spreading around!