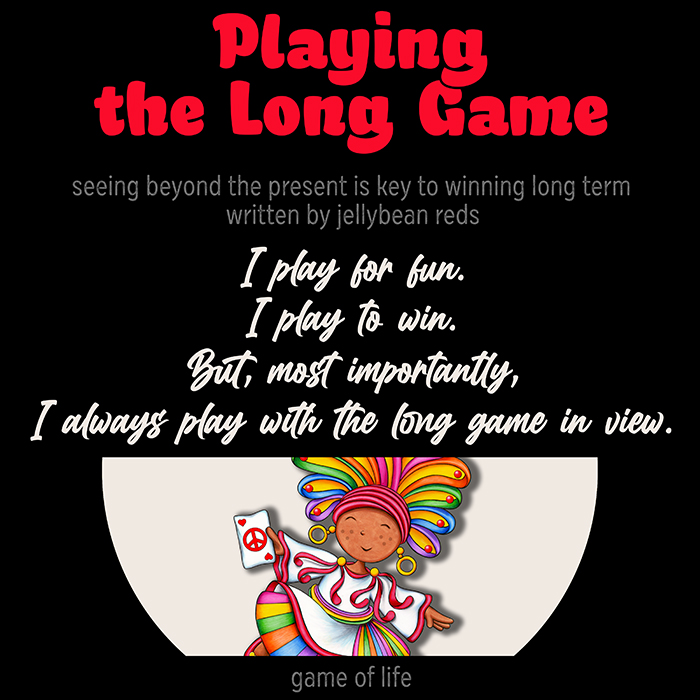 My sister, Poppy, and I loved playing cards. The fact that our father was a renowned magician both on stage and in real life probably pre-disposed us to our abiding interest.

The first game we played, though we really weren’t trying to play one at the time, was guessing the reaction on our father’s face when he discovered that we had purloined one of his favorite decks and proceeded to change the cards to our pre-school liking, which involved not only a vast array of stickers, but a helping of glitter as well.

Though this may have been the first time that our father truly realized that traditional children’s games with cards held little interest for us, the point was not missed, and soon afterwards we were both handed a new unvandelized deck and taught the rules to a handful of classic card games. He clearly hoped his initiative would keep us from extracting any further entertainment from any of his prized decks.

And it did, for a while, until Blueberry introduced us to the concept of trading card games and the strategy of deck building. Poppy was immediately besotted and insisted on playing not only with Blueberry but with his friends.

Blueberry’s friends weren’t cool with having us join them at first. But, Poppy could be quite persuasive when she wanted something, and when she brought it to their attention that the fantasy-themed games they favored were not on the list of officially recognized card games that decorum-ruled Cratersville allowed, they decided that it was best to be egalitarian and invite us into their club.

Over time, we rewarded their open-mindedness by showing them the tricks of a card-sharp that our father obligingly showed us. Undoubtedly, these tricks of the trade were utilized, to their great benefit throughout their junior high and high school years.

By then, Poppy and I had gravitated to other interests, and we didn’t play as much with the guys as we used to. This was probably for the best, since it wasn’t long afterwards that we learned about strip-poker—enough said.

Then, there were the skills that we didn’t share. These involved the secrets our father showed us, where everyday cards could be imbued with magic. With this knowledge we could make card collecting games come to life or make it so that an average card could conjure an item, a special effect or scene. Eventually, we created our own decks with our own designs, littered with our own bits of magic.

Sometimes, on certain days, we would risk the wrath of the watchers by whisking out a deck and wowing a small gathering of friends and acquaintances, but like I said, the decorum of our small iconville frowned upon such things, so we usually kept our magic to ourselves.

Today, though my friends and family are different now, I still play with cards. I play a wicked game of poker—no stripping required, but bluffing is a must. I also also play games that are peculiar to the Creators Realm.

Of course, I can’t help but add a few cards with special powers to the decks I use—just to make things interesting. It makes a nice ice breaker for those who are uninitiated into my style of play, plus it comes in handy when I find myself with a losing hand.

I play for fun.

I play to win.

But, most importantly, I always play with the long game in view.