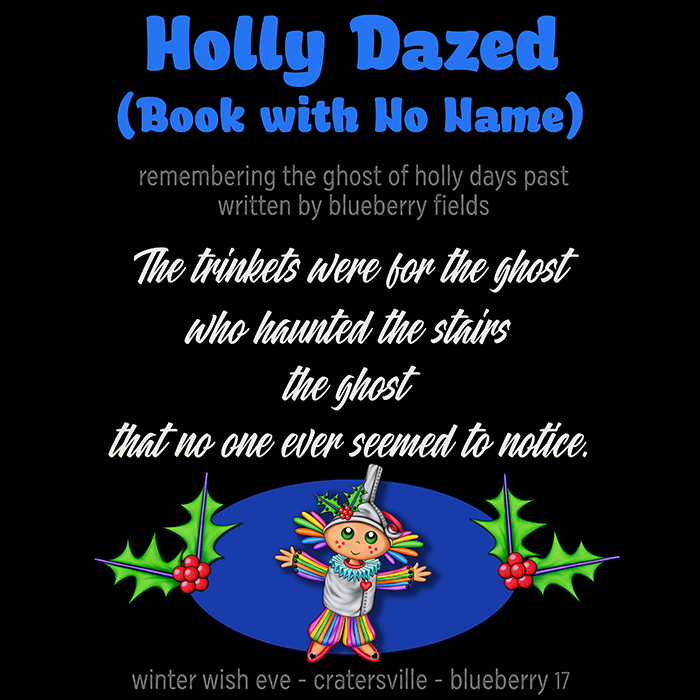 Hi, my name is Blueberry Fields. Those closest to me call me Blue, everyone else refers to me as Mr. Fix It because I fix things that the Magic breaks.

Since it’s my job to fill you in on all the details that Jellybean leaves out of their* story, I thought I might fill you in on how I got this crappy job in the first place.

I didn’t ask for it. I was recruited, a devious move on the Magic’s behalf.

It was Winter Wish Eve after the fire—the one that toasted Mr. Reds theater. A lot of weird shit happened that night including the vanishing of Jelly’s sister Poppy. I would say she died, but since no body was recovered, I consider it an unsolved mystery in the first degree.

Usually, Mr. Reds would have thrown a swanky bash on Winters Wish Eve, but since no one really felt like celebrating with Poppy being gone and all, my parents offered to host a small gathering at our “in town” house instead.

Bluesy and I were putting the finishing touches on the Winter Wish tree when the doorbell rang. I was expecting Jelly and their parents to walk in. Instead, I got the shock of my life. “Fuck,” I said under my breath, “what are they doing here?”

Bluesy grabbed my arm. “Shush, Blue, they’re our guests,” she whispered before releasing me. Like a good hostess, she stepped up to take the two long, winter coats from the unexpected guests.

I hung back as greetings were exchanged all around. Finally, I stepped forward. “Welcome to our house, Ms. Violet,” I said.

Vivian smiled and held out her hand. She wore long, satin gloves. She was elegant that way.

Vivian Violet was the talk of the town. She was the Great RazzleMaTazzle’s assistant on stage and a showgirl to boot. She sang, she danced, she made hearts flutter, including the heart of one Razzy Reds—Mr. RazzleMaTazzle himself. At least, that’s what the rumors said.

Next, I greeted Vivian’s daughter, Ember. “Nice to see you.”

“Nice to be here,” she said, looking around, enthralled.

Ember had turned fifteen on the night of the fire. She had the features of her mother, all tall, violet hair and glamourous. She wore tuxedo pants, a red cummerbund, black ballet flats with a white, pleated button-up shirt. It was similar to what Jelly wore sometimes. I guess when you hang out at the theater your whole life you can’t help but dress weird. It was the first time I had seen Ember outside of her usual haunts.

Ember’s attention turned to the tall Winter Wish Tree by the picture window. It was a showstopper. You couldn’t miss it coming up the long walkway from the street to the porch.

Grandma Fields used Ember’s interest to regale her about the esoteric history of each unique bauble, many of which were acquired before I was born.

This time, it was Jelly and their parents. Once more, greetings were exchanged. I watched for any signs of weirdness between Vivian and Jelly’s mom, Cinnamon. I didn’t see any. Kisses were exchanged. Hands were grasped and released.

Jelly sidled up to me. They hated the fussiness of formal greetings. They handed me my Winter Wish gift. This year, they were wearing jeans and a funny sweater. The sweater featured a T. Rex wearing a Santa hat—a tribute to Poppy.

The rest of the evening went on as normal. Conversations were had, food was eaten, winter wishes were made. We skipped the sappy songs. No one really felt like singing. Every once in a while I would catch a glimpse of Ember. She haunted the periphery of the room like a phantom, a ghost in a roomful of holly dazed people.

When the evening ended, Ember was last to leave. She stood at the front door. “I don’t know if I’ll ever see you again,” she said, suddenly verbose.

I should have been suspicious, but I wasn’t. She motioned with her hands, conjuring a plume of red smoke and glitter. I was transfixed. When the spell broke, she was gone.

I closed the door. After some moments, I glanced up. There, on the Winter Wish Tree by the window, was an ornament I hadn’t seen before. The ornament was round and clear like a snow orb. It was filled with black and red tendrils, curling and uncurling, a jinn waiting to be born.

Early Winter Wish morning, I was the first down the stairs. I sat and stared at the freaky ornament as I thought about the speakeasy where Mr. Reds always threw his soirees.

Every Winter Wish Eve, I would sneak to the stairs behind the bar and leave a trinket on the bottom step. The stairs were hidden behind a velvet curtain and went up to private quarters where guests and family would stay after the party was over. The trinkets were for the ghost who haunted the stairs—the ghost that no one ever seemed to notice.

That afternoon, we drove back to our home in the desert. I took the ornament with me. I hung it by my window, a trinket to remember the ghost of holly days past.

The next morning, there was an invitation to the speakeasy on my windowsill.  It was for Glitter Eve. I should have binned it, but I was a sucker for mysteries.

Glitter Eve came. It was the first year that Jelly wouldn’t be in town. They were staying with their mom in the Wanderlore Grove. Their old man was at his other theater. The one he favored in the Big City. That’s where Vivian and Ember would be. That’s where they were every year.

Bluesy and my parents were heading over to grandpa and grandma’s house for some midnight fireworks. I told them I would catch up with them later.

As darkness fell, I made my way to the alleyway where the entrance to the speakeasy could be found. Just to be clear, there was no finding the speakeasy without an invitation in hand.

Unlike other nights, there were no other people to be seen. The speakeasy hadn’t hosted a soul since the fire tore up the town’s script.

The door appeared as I approached. I knocked three times. A small panel slid open. I recited the words of entry. The panel shut.

The door closed as I stepped inside, the work of a phantom hand. I turned on my flashlight. The place looked like it had been abandoned for decades not weeks. Dust piled thick on the tables and railings. The secret shrine stood silent. Its crystal decanters entombed in grime.

I made my way across scuffed and matted floors. They pulsed with a strange life, the swirling of twinkling dust. I flicked back the velvet curtain. On the first step was a book, black as night. Clockwork gears turning on its cover. It had no title.

The Book with No Name felt ominous, like a tome of secrets. I pocketed it without looking inside. Some things are best left unknown.

Before leaving, I placed a little tin ornament on the bottom step. It was part of the Wizard of Oz set that Grandma Fields had given to my parents for their first Winter Wish together. There was a red heart painted on the tin creature’s riveted chest. I figured that if Ember ever did return, she would need it more than us.

The Book with No Name haunted my room until I graduated and left town. I never once opened it. I figured if it stayed closed, I wasn’t obliged to know its secrets. I hid it at the bottom of a trunk in my room, a memento to the life I was leaving behind.

First night in a new town, I was staying in a hole-in-the-wall above a nondescript shop. Upon arrival, I put the creepy ornament in the dingy window before heading out for some grub. I figured it might scare off intruders.

I ate dinner at a greasy spoon down the street then I stopped at a convenience store before making my way back to my accommodations. Tomorrow, I would start my new job fixing the clockwork in this shitty icon world before bugging out to the next loser town. The clockwork was always breaking since Jelly left the realm.

I climbed the stairs. They seemed a bit dustier than earlier when I had first arrived. On the top step, next to the landing, was a book, black as night. I picked it up. The clockwork on its cover glowed an eerie blue. Having nothing else to do that night, I opened it. The pages inside were all blank save for a command written in glittery black ink:

Every story has two sides—write yours.