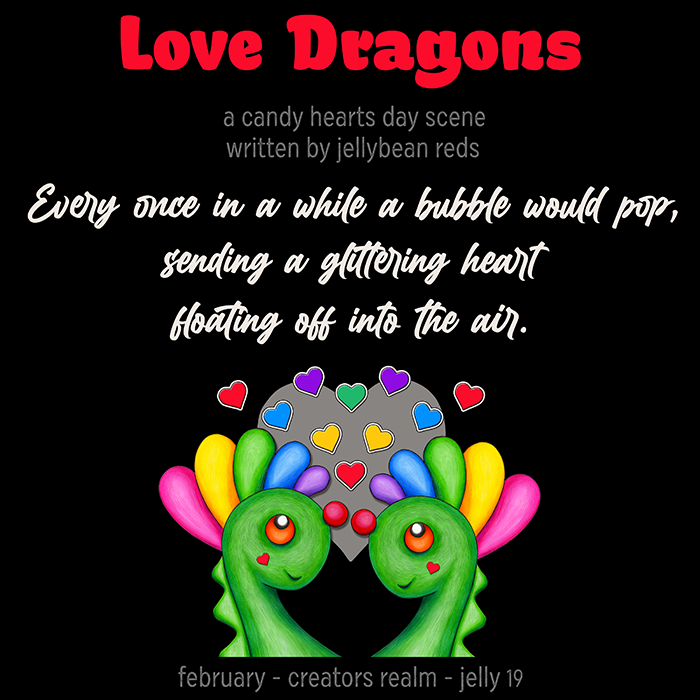 It was Candy Hearts Day. The second one to have rolled around since I entered the Creators Realm, but my first one since I started seeing Nori.

I was sitting in front of an ancient desk engraved with symbols. My Creation Book was opened in front of me, and I held a rainbow quill* in my hand. There was a small cauldron levitating above the back corner of the desk—a magical flame flickering beneath it.

The cauldron was in full effervescence, sending bubbles into the air only for them to be pulled back down again into the roiling liquid below. Every once in a while a bubble would pop, sending a glittering heart floating off into the air.

The cauldron, much like the craters in Cratersville, would be the source from which the creation I was envisioning in my Creation Book would ultimately form.

Creating “Valentines” for those people I knew back in the Icon Worlds was easy. This year I had sent the same cute little designs I had always done since I’d been a kid. Though their method of delivery** was far from the conventional handing out at school I had previously done. These were Valentines of familiarity and friendship.

But what kind of Candy Hearts Day card should I make for Nori?

Nori was definitely a friend. We had hit it off as soon as we had met this past October, but I struggled as to what kind of Valentine to give to someone who was more than the “first love” friend I had had in Blueberry or the occasional flirty friendship I had with my “kin sister” Rowan.***

Should I do something more formal than the cutesy “be mine”?

Should I try for elegant?

You see my problem. I’ve entered a whole new world both literally with my entrance to the Creators Realm and figuratively with my relationship with Nori.

This crossing of a threshold had left me feeling outside my element. I questioned everything about who I was and what I created. I always tended to create lighthearted fare.

I put a lot of soul and emotions into my creations, but I never could bring myself to create the fantastical—bordering on erotic-style—that my sister Poppy indulged in.

This was my problem, I was always comparing myself to someone else.

Rowan’s observation was that people generally fell into a few main archetypes, but the people who really made society work—especially when challenges arose—were those people who were just a bit (or a lot) different. These people were the ones who would think outside the box—or perhaps even do away with the box all together. They were the glue that would hold a crumbling society together or—if that failed—allow for a new one to take its place.

I have pondered Rowan’s words quite often since entering the Creators Realm. Again, I’m faced with many people that fit certain archetypes of being that I know I will never be.

I’m the outcast, the overlooked, the easily forgotten.

Nori’s says that this makes me the perfect Moon Bard. She accepts me for who I am despite the fact that I’m not as exciting or exhilarating to be around as she is. I compliment her being. I warm the quiet nooks and cosy crannies of her soul that only she and I will ever know.

Rowan would say it’s a matter of perspective.

Nori would say it’s about not romanticizing society’s skewed ideals.

And, as I looked at my Creation book, I realized that I didn’t need to change myself to express my feelings to Nori, I just had to embrace—fully and without hesitation—what I’ve always been.

Late that afternoon, I met Nori at her little Shop of Wonders. I presented her the card that I had so carefully created. I picked a motif whose significance she would know.****

Her eyes lit up as she saw the two sea serpents on the cover of the card framing the words “be mine” set against a background of rainbow hearts. She knew how I always stayed away from drawing anything mythical or dragon-inspired lest I fail to live up to my sister’s exacting standards.

Inside the card was a single creature with vaguely reptilian features that looked more like a character balloon from a Turkey Day Parade than any dragon that most would recognize.  Next to the marshmallowy sweet confection were the words “tickle me”.

When Nori stroked the dragon a small puff of confetti emerged from its lips.

It was the best Candy Hearts Day card I ever made.

And, it turned out to be the sweetest Candy Hearts Day I ever had.

*The quill was magical and had taken many forms throughout the years since I had acquired it, including a long stint of masquerading as a standard no2 pencil.

**Since I couldn’t return to the Icon Realm in person and there wasn’t a postal service between the Creators Realm and the Icon Worlds to speak of, I had to rely upon the only creatures who could reliably make my deliveries for me—the dust daemons. Their terms of service were usually something sweet provided on a plate with rainbow sprinkles.

***Rowan was Fia-kin’s daughter by another paramour before she met my mother whom she fell instantly and unstintingly in love with. Those of the Wanderlore tribes rarely have just one romantic relationship throughout their lives. I was brought up in this environment which also meant that Rowan, though a sister of my kin-clan, was not related to me by blood. Being several years older than me, I considered her a mentor as I navigated my lonely and confusing teenage years, but our age difference definitely kept our flirtations on an innocent level even though this obviously wasn’t the case with my mom and Fia.

****See the dispatch ‘Here Be Love’ to read what I’m referring to.