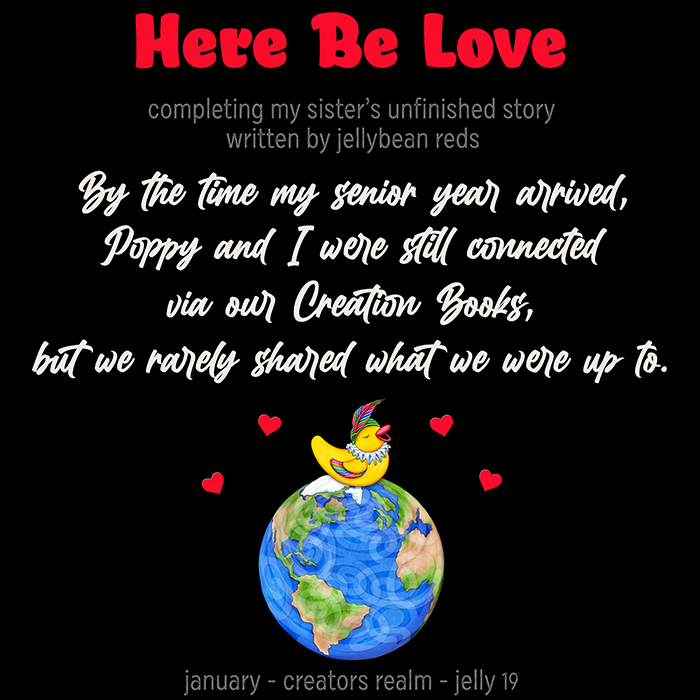 I keep a small, parchment* map tacked to the wall of my room. It’s a map of Earth that was created by my sister Poppy while we were teenagers in Cratersville.

I had used this beautifully illuminated map to fulfill one of her dearest wishes on the day of the Winter Solstice shortly after I arrived in the Creators Realm.

I found the map with a hoard of magic-imbued soul orbs. The orbs contained the essences of creatures created, but not yet born.

With words spoken from my heart and uttered by my lips, I brought her secret cache of dragons** to life.

Afterwards, I watched the progress of the dragons—via the map on the wall—as the various icons of sea serpents and other fantastical beasties charted their various courses.

The dragons made me happy.

They also made me sad.

This mirrors the relationship that Poppy and I had over the years.

When we were younger, Poppy and I did everything together. I believe that part of this was because Poppy—despite our birth order—always took it upon herself to be the navigator for all our adventures as well as the protector and explainer when things went awry.

When we were kids, I liked it that way. I was shy and slow to take initiative. I liked to think. She liked to do. It was a match made in heaven until our personalities developed, at which point, it became a match made in purgatory as we slowly drifted apart.

She was the revolutionary. She was edgy. Her creations were beautiful, bold and demanding.

I, on the other hand, was the evolutionary. I may have pushed the envelope, here and there, but I never lit them on fire. My creations were vivid, vivacious and hopeful.

By the time my senior year arrived, Poppy and I were still connected via our Creation Books, but we rarely shared what we were up to. Thus, when she made the fateful decision to stay at the Realm-Between-the-Worlds it left me shattered.

Why didn’t she tell me what she had planned to do?

Why didn’t she give me a chance to say a proper goodbye?

For months, I pondered these questions as I recorded the dragons’ movements around the map. I had hoped that bringing Poppy’s fantastical children to life would have salved some of my feelings of loss.

I was disappointed that it hadn’t.

I still wished that we could have worked on one last thing together.

As the first year anniversary of the dragon’s creation approached, I awoke one morning to find a troubling sight. The dragon icons that had both entertained me and troubled me were starting to fade.

I wondered what it could mean.

That night I visited a shop in one of the Patron Worlds that was run by a girl I had grown to trust in all things mystical and magical.

The girl was about my age, yet she embodied the knowledge of many previous lives.

She always complained that she was young, for she had gotten more respect for her talents and wisdom when she was older.

The girl’s name was Stella Noir Luna. She had long dark hair and beautiful brown skin. She didn’t seem like a Stella to me—or a Noir, which made me think that she should be starring in a black and white crime film—so I gave her the nickname Nori instead.

Nori’s shop was filled with clocks of every kind and design. These timepieces were waiting for their respective owners who would come—when the time was right—to discover their soul’s mission. Nori was a fortune teller of sorts. It was her duty to make sure that a soul’s birth mission was discovered and stayed on track.

I unrolled the map on the long glass counter that ran the length of the store. Nori studied it as I told her the story of the map and explained my concerns. Her brows furrowed as she stirred the contents of her coffee cup. When stirring was complete, she placed the cup on top of the map.

She grabbed my hands and placed them around the cup along with hers. The cup was warm, enticingly so. This was her scrying cup and it was filled with an elixir I could not identify, though I knew that when it was activated it provided images that allowed her to divine answers to questions that would be inscrutable otherwise.

We both watched as vivid colors filled the cup. Then stars appeared, glittering like frenzied atoms. These faded as a scene of an ocean came into focus. Then the image of a sea serpent flickered briefly before fading away, only to be replaced by a book with no title. The book opened, revealing pages devoid of images or type. The cup went dark.

“That’s your answer,” Nori said as she released my hands.

“What answer?” I said, perplexed. All I saw was a flickering sea serpent and a blank book.”

“Exactly!” she smiled. Her dark brown eyes sparkled. She continued, “When the dragons were created, your sister wrote a story to explain their existence.”

“Yes,” I confirmed, “that’s how all creatures are created.”

“But, your sister left something out.”

“Jelly, you don’t understand. It wasn’t a mistake. She knew that for her creations to work, they would need the magic of the Sun as well as the Moon; Your magic as the Moon Bard completes her unfinished story.”

“It doesn’t have to be a living creature,” Nori explained. “That would be dangerous. The dragons were created to bring balance to the Earth. Your sister knew that, as Sun Bard, she couldn’t provide this balance alone.”

I had no idea how Nori gleaned all of that from her scrying cup, but it did make sense.

“What should I make then?” I asked. I didn’t have Poppy’s infinite knowledge. Knowing my luck, I would cause a mass extinction.

Nori must have been reading my mind. “Keep it simple. Let your magic be your guide.”

I spent the next day racking my brain. What could I create that could bring balance to the magic of Poppy’s dragons? Should it be big or small? Should it be one magical thing or many?

Late in the evening, I decided a bath was the thing I needed.

As the water filled the tub, I performed my usual ritual of lighting a bath-side candle and placing two rubber duckies in the water. The duckies had been my bath companions ever since elementary school. One was a regulation yellow ducky that you’d pick up in the five-and-dime. The other ducky was not so regular for Poppy had charmed it to make it look like a cute sea serpent—at least as cute as Poppy could muster. I watched the duckies bob around the water. That’s when I got an idea.

Turning off the faucet, I rushed to my Creation Book. Some years ago, back in Cratersville, I had run across a story on the great cloudy web about a shipment of little, yellow duckies that got lost at sea. For years, after their nautical mishap, the little yellow duckies floated around the ocean, washing up on various shores, while being studied by people to gain insights about the ocean’s currents from their various journeys.

After I checked the details of the little duckies mighty voyage and made a few notations of my own, I knew I had found my answer.

A couple of weeks later, I once again found myself hovering above the Pacific Ocean on another grey and dreary day. Nori, using her magic, hovered next to me. She was holding a large embroidered bag that contained, what I hoped, would complete the dragon’s unfinished story.

On cue, Nori upended the bag, sending hundreds of crystal clear orbs cascading to the water below.

The orbs sank below the surface as I recited a short spell. The spell wouldn’t grant life to my creations, but it would make them real enough to finish Poppy’s unfinished story.

The next day, I rushed to the map to see if my magic had worked. The dragon icons were brighter, significantly so. They were also joined by tiny representations of little yellow duckies spreading slowly in the ocean’s currents from the spot where they had been set free.

The duckies, riding the waves of the ocean, would grow over time, becoming quite a bit larger than their bathtub cousins, but much more ecologically friendly for my yellow duckies were made entirely of magic—the magic of love lost and found again—the magic of the moon.

Now, the story that was unfinished and untitled was both completed and named:

**Poppy’s dragons lived on land, in the sea and in the air. Her dragons resided in caves, in tree hollows, amongst coral reefs, and in the deepest of deeps where magma flows. They also live hidden amongst the clouds, where rainbows end, and inside the human heart.