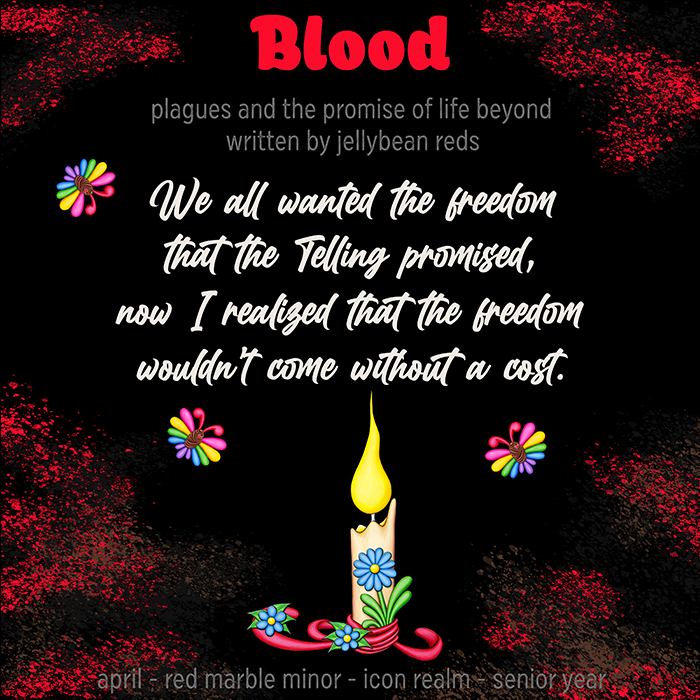 The ten plagues, in order:

Death of the Firstborn

Every year, we told the same story. How an ancient people, enslaved in Egypt, were rescued by their God to be his people.

When my sister and I were children, the plagues were a source of jest and pranks. Conjured frogs leapt across the table, landing in guests’ laps. Hail was cellophane confetti that melted and vanished once a solid surface was encountered. Darkness was the sudden snuffing of candles by a phantom breath.

Death of the first born was the eerie silence waited out in the darkness that grew longer as our ages increased.

My best friend, Blueberry, upon his first experience of my family’s version of the Telling in the tenth grade, nudged me and said, “this is some strange shit, Jel.”

I suppose the Festival of Freedom is strange to those who had never experienced it. The Festival of Freedom—also known in days of yore as Pesach or Passover—was truly unlike any other Traveler Festival. To be sure, there was food and songs, but the main event was the Telling of a story that related not only how a people became enslaved, but how, through the intervention of a powerful God, they were eventually set free.

For thousands of years, this story was the glue that held “the Tribe”, as they were then known, together, for it was the story of a single birth that they all shared.

After the Great Dying, when the remnant of people known as the Wanderlores finally left their Earthly home, the holidays of various cultures were preserved into a concept known as the Great Cycle. Afterwards, all people who followed the Wanderlores’ ways, no matter their heritage, would be charged with keeping alive the various traditions that were in danger of being forgotten.

This was important, for the stories that people tell and the rituals that they perform aren’t just empty gestures to phantom gods, they are the embodiment of human knowledge and survival skills. They are the remembrance of people and things lost as well as the hope of things yet to be born.

Rituals and traditions give us the strength to venture into the great unknown at those moments when we have no choice but to make a great leap of faith.

In my senior year of high school, as the Festival of Freedom began, I dreaded the reading of the plagues. Poppy was no longer there to hold my hand when the lights went out. Blueberry, though present, withheld his wise-ass comments. My parents were somber. The Telling which once felt so full of hope, felt of fear. Fear of the unknown.

Suddenly, I understood the part of the story that had always puzzled me. When the Israelites were delivered from Egypt, Legend says that some missed their old life (even though they were enslaved) and wished to return. Many people misinterpret their longing as somehow wicked or weak-spirited. I would like to venture a different way of viewing their desperation to return to the life they knew.

As I sat at the table during my senior year, my mind suddenly flash-forwarded to the future. I didn’t know where I would be then. I couldn’t imagine what my life would entail. Would I still have my friends? Would my parents still be by my side? Even though, at that moment, nothing had changed, I suddenly found myself longing for my former life—the life before the Telling had become all too real.

We all wanted the freedom that the Telling promised, now I realized that the freedom wouldn’t come without a cost.

I understood then that the true challenge when faith-shaking events arise isn’t always during the moment of fear, but afterwards when the dust settles and nothing is the same.

As the candles flickered to life and the Telling continued, all I could hope was that whatever came my way, I would have the wisdom to remember my time in Cratersville without letting it become a longing that kept me from my future path.

The hard part is when you have to rebuild.

That’s when the brave are truly born.