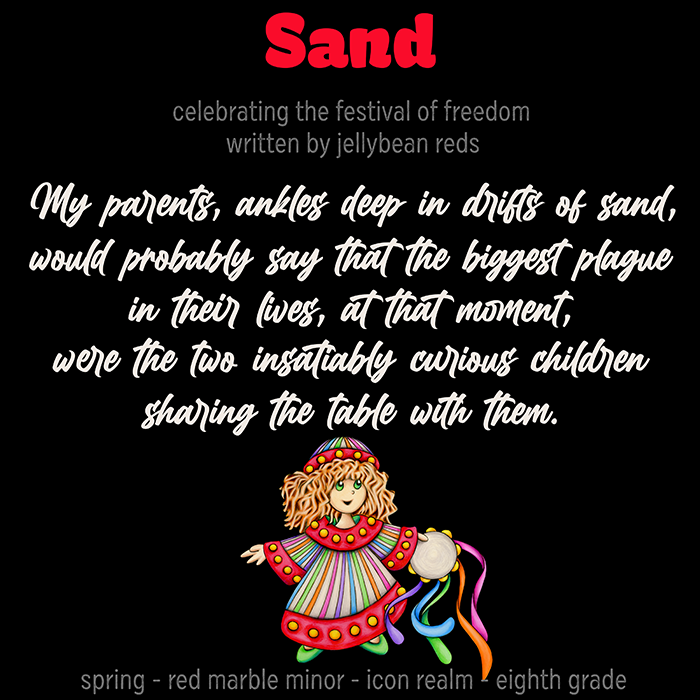 Sand was everywhere. It was in our shoes. It piled up around the chair legs. It formed dunes on the tabletop between the wine glasses and ceremonial dishes.

It was the Night of the Feast of Freedom. We had just concluded the first part of the Telling—that ancient tale where, set against a backdrop of sand and pyramids, an enslaved people attain their freedom through a series of plagues that convince the leader of the land to let said people go.

My parents, ankles deep in drifts of sand, would probably say that the biggest plague in their lives, at that moment, were the two insatiably curious children sharing the table with them who seemed to attract a string of never-ending strange occurrences like—well—the plague.

Of course, all of the strange occurrences—from the special effects unleashed at our family’s Tellings in the spring to the little creatures that played havoc in the town and its environs throughout the rest of the year—were all of our doing.

My sister and I were co-creators of mayhem thanks to a strange and powerful Magic we had discovered several years previously. Not only could we create special effects with our Magic, but little creatures who could create their own special effects as well.

Thus, when the Feast of Freedom rolled around, it was natural that we would use our secret powers to turn a simple Telling into a fully staged theatrical event complete with a cast of little creatures playing all of the scripted parts along with a few improvised parts thrown in for good measure.

You might think that our parents would frown on upon the liberties we took with such a sacred script, but they didn’t.

In fact, the power of the Telling comes from the ability to retell the tale in new ways, making it relevant not only from culture to culture and family to family but throughout the sands of time.

Really, when you get down to it, the power of the Exodus isn’t so much about the story of an ancient people leaving bondage, but about the message that each of us—even today—can overcome the things that keep us enslaved.

Be it harmful habits, belief systems or relationships, all of us can—at one time or another—find ourselves ensnared in a land we wish to leave, and, every spring, we’re reminded that if we get in touch with our inner Magic, we can find that land of freedom.

We just have to be brave enough to take ourselves there.