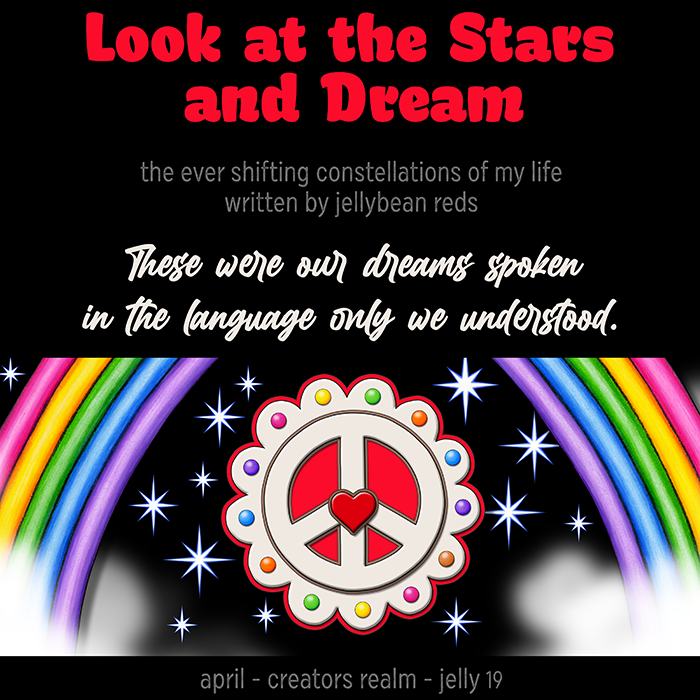 Look at the Stars and Dream

The owls were hooting their haunting enchantment as my sister and I slipped from our room. The moon was new and, as was part of the Wanderlores’ tradition, my sister performed a ritual to bless the coming month.

I was not initiated into my mother’s magic at the time, yet—no matter the weather—if I was staying in the grove, I would find myself muttering blessings to a darkened orb bereft of even the slimmest sliver of light.

My feelings for natural rites wasn’t as strong as it is now, yet I knew there was power in what we were doing.

Legend spoke of how the Wanderlores kept the icon worlds* tethered to the original world where all life sprang—Earth.

I wasn’t sure then if this “tethering” was symbolic or real. I just got the sense that if the rituals weren’t performed, the clockwork of the realm would stop working.

As dramatic as this sounds, my heart wasn’t truly moved until the observance was over. It was then that I shifted my attention to the stars that peppered the velvet sky. Without the glow of the moon these points of light blazed like diamonds.

Again, these were no more real than the moon we had just paid homage to, yet they were still breathtaking. Both the moon and the stars—indeed, all of the celestial spheres visible in the Wanderlore Groves and icon worlds—were mere replicas of the original ones our ancestors watched so long ago.

Poppy must have been just as awestruck as me for she would often linger outside with me and take in the grand celestial views. It was then that we spoke of our dreams.

When we were in grade school our dreams were utopian untempered by experience.

As we entered middle school our dreams, though less fantastical, gained a level of ambitiousness that would have astounded our younger selves.

When we were in a particularly playful mood we would use our Creation Books to paint our dreams in the sky. Poppy would draw creatures amongst the constellations while I wove rainbows through her fauna-filled tapestry. These were our dreams spoken in the language only we understood.

Poppy was a revolutionary radiating the blistering light of the sun. I was the moon reflecting a softer glow of change. We didn’t know then that our very dreams were slowly unraveling the realm.

In high school, I shared my wonder of the stars with Blueberry.

On long summer nights we would take his starcar high into the hills surrounding Cratersville. From there we’d watch the lights of our small iconville flicker to life as day turned to night.

Blueberry would snicker at the small patch of light shimmering in the dark desert. In his view, the city was barely alive during the day and it positively flatlined at night.

His assessment wasn’t far from the mark, but few icon worlds I had visited had a better view of the stars. And we definitely had more shooting stars than most.

Blueberry blamed it on the little creatures. He said that they were screwing up everything from the clockwork to the weather. He was probably right, though secretly I cheered their disruption—I liked the shooting stars.

I think he did too.

In my last year of high school, I remember the night my father and I stood outside at midnight on the rooftop of his theater. His theater was located in downtown Cratersville. The view wasn’t as great as it was from the hills, though the brightest stars were still visible.

He wasn’t as much of a stargazer as I. He preferred big cities bustling with people. The lights that excited him were ones that lit up buildings and drew crowds.

Still, as we stood outside on that autumn night, the stars seemed to hold his interest more than they usually did. Then I saw it. The stars weren’t twinkling, they were winking off and on in a worrying erratic pattern.

By this time I knew that the clockwork wasn’t just being affected by the little creatures but was on the verge of winding down completely. We both knew that something had to be done.

A year later, as autumn turned to winter, I lay on a fading patch of grass, looking up at constellations I hadn’t known before. I was in a different Realm than the one I had grown up in. The stars in this particular place weren’t imitations of celestial bodies but of souls waiting to be reborn.

I had visited quite often the last few months, wondering what nightmare drove my parents from this Realm, and what dream prompted their sacrifice that allowed me to return—alone.

I didn’t know at that time that constellations I had yet to discover were being reconfigured, changing the course of my life.

The following winter, I was standing on the shifting sands of a desert. I stared at the stars overhead. I was on Earth. The real Earth. The one of Legend, the one that the Wanderlores wished to return to.

I wasn’t alone. I was one of two. And, as we held hands, we both realized that these were the first real stars that either of us had ever seen in this life. We wouldn’t stay. We couldn’t—not yet. The Creators Realm was our home and there was much to be done there.

A few months later, as winter gave way to spring, I looked at the stars outside my window. I was in a tall, ancient tower made of stone. This tower had been my home since I arrived in this place, yet I knew that the stars I saw were leading me to destinations still unknown.

I never dreamed I would start feeling at home in this strange Realm where I was born yet was just getting to know.

I never dreamed that instead of living the life of a Creator or Patron I would choose to pursue the life of a Wanderlore instead.

I never dreamed that new people (and creatures) would come into my life making me feel whole again.

I guess you can say it was written in my stars.

I was born into a theatrical realm where most things are controlled by the Decorum. This is the Script by which the Realm is run. But, I’m the unexpected, as are the other Bards. We have the power to Script the Realm anew.

This was the dream of my parents and my sister.

This is the dream of the Bards and those who support them.

This is the dream of the Creatures who yearn to be free.

This is the dream of the Phantoms who only wish to be included.

This is the dream of the inhabitants of the Icon Worlds who only wish for a way to return.

This is my dream.

The stars above will never be the same.