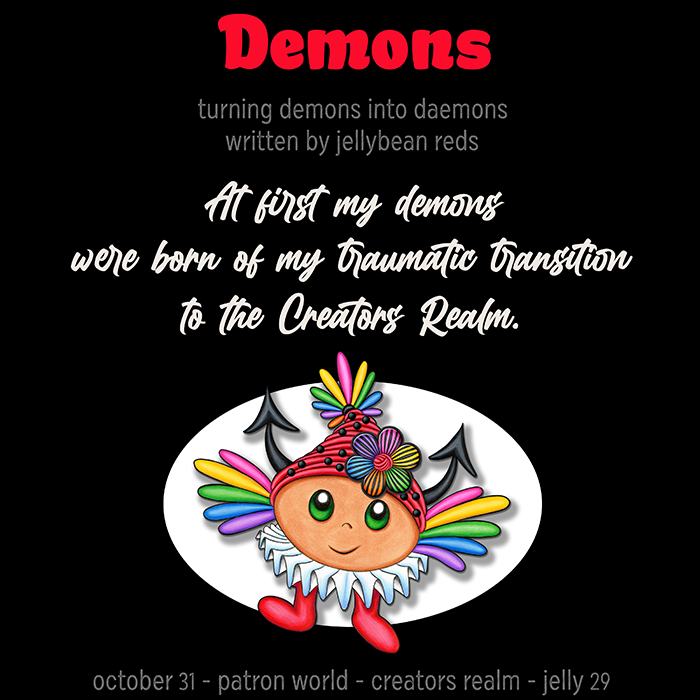 In society, strictures for behavior are strictly upheld to prevent order from dissolving into anarchy.

Yet, the daemons of chaos are always needed to unlock imbalances that naturally take hold in such environs.

I’m writing these words on the “Night Between the Worlds.” Long ago this night was known by other names such as All Hallows’ Eve or Halloween.

In some icon worlds this night was notable—especially by those in school—as the night where the decorum of the world in which they lived could be violated penalty-free.

Though I wasn’t terribly unhappy growing up in the kitschy retro-futuristic town of Cratersville like some people I knew, it didn’t stop me from participating in the flagrant era-breaking of that night.

Here in the Creators Realm, however, the Night Between the Worlds is just another night. That doesn’t mean it doesn’t have a sentimental (yet solemn*) place in my heart.

Nori knows this. This is why she goes out of her way to make the night special for me every time it rolls around.

At the moment of this writing, Nori is dressed in a devilish outfit complete with fishnet stockings and shiny red boots. She’s behind a long glass counter showing a bemused shopper the secret to drawing out and taming their inner demons.

I’m not sure if that’s why the person in question came into her clock shop, they may have just wanted an intricate piece of clockwork with a few magical properties thrown in to help navigate their everyday existence.

Nori doesn’t care why someone comes in to her little Shop of Wonders. She knows that many times the things that people need most aren’t looked for directly.

This is why she custom designs her timepieces in haunting and provocative designs that draw people to explore their inner worlds where secrets and demons reside.

Nori is a guide. She is also a Host who can traverse the limnal worlds where Creators, Patrons and Wanderlores cannot go.

She’s taken me on these journeys over the seasons.

This is where I’ve learned about my own demons.

At first my demons were born of my traumatic transition to the Creators Realm. Some were demons of loss, while others were demons of uncertainty. As I assimilated my losses into the fabric of my new life and came to grips with the less than spectacular prospects for my future, my demons settled into uneasy accomplices that I drew upon when faced with new situations and when making new connections.

My next batch of demons came hot and heavy as I negotiated the Wanderlore ways in life, love and family.

I would end up “rewriting the stars”—a Wanderlore phrase used when tradition or expectations are broken when Kin and Ritual Clans are formed.

I’m not the first in my family to embark on such a controversial course. My parents rewrote the stars of their own lives with the formation of their own Kin-Clan.

This history, however, begets demons even as my current family begets even more as it grows.

Demons are a part of life—everyone has them. The trick is to not let them destroy what you’re trying to build, which they most assuredly would do if left to their own devices.

Tonight, as I conclude this dispatch, I’m thinking of my current demons. I have quite a few left to explore. Many I will transform into the more helpful—yet still puckish—daemons with an “A” as I go about my life, just as I have done many times in the past.

Some demons will no doubt keep their sabotaging ways. These may not become my allies but, with any luck, they will not stop me from becoming a wickedly great Bard or Jelly-kin**.

*Solemn for the events that happened in my senior year which I won’t recount here.

**Wanderlores tend not to use the titles of mom or dad, they instead assign the -kin suffix to the first names of parental figures within a Kin-Clan. 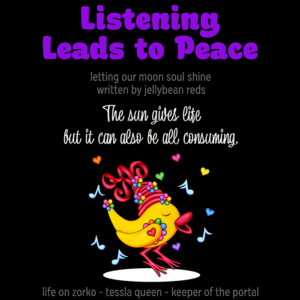 Perhaps it’s time to admit we’re doing this all wrong. I’ve been watching culture all my life. I watch, I listen, I cogitate. Cogitation, for