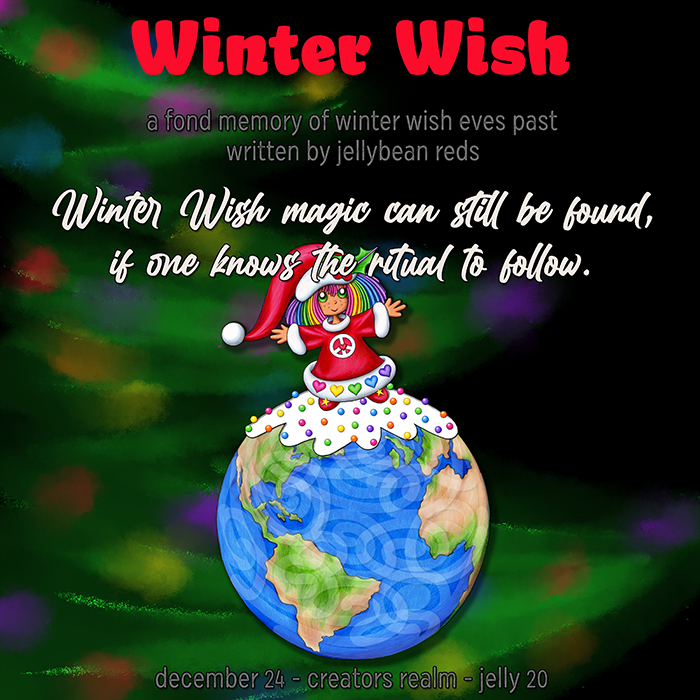 It’s the morning of Winter Wish Eve. In a few hours Nori and I will be hosting a Winter Wish party at Zell’s Place. But this morning is a time for remembering as I have done for the three years since arriving in the Creators Realm.

Yet, there is a magic to Winter Wish that can be had if one knows the ritual to follow.

My favorite memory comes from a Winter Wish I made when I was six.

My father took me ice skating as was our ritual to do. I believe he felt sorry for me, for I wasn’t as eager to participate in all the last minute holly day stuff like my sister Poppy was.

Of course, our outing wasn’t as straight forward as one might expect. My dad always like to participate in a bit of creature alchemy before the skating began.

He did this to teach me the fine art of transforming into a creature of choice with the help of a magical ingot. This talent ran deep in our family’s history.

While the transformation was easy enough, the experience of actually being another creature took me years to master.

At the tender age of six, it was hard enough for me to gracefully navigate the human world in which I daily lived, let alone mimic the smooth moves my father so naturally made when in another form.

Imagine it, two red birds hopping amongst the evergreen branches of a snow-flecked tree.

Other birds looked on curiously as we flitted from branch to ground and back again making our way along the shore of a frozen lake.

My father ended our foray into creature alchemy by singing a short musical interlude. I always enjoyed this, though it would be years before I attempted any tweeting of my own.

Alighting from the branch, my father the bird made a beeline to the frozen lake below. I followed in quick pursuit.

What followed was an artistic miracle born of endless hours of practice with just a touch of magic to enhance the theatrics.

My father transformed back into human form before touching down gracefully on the ice, his arms held high waiting for me to follow.

I transformed back directly before landing safely into his open hands.

He spun me around several times before lowering me to the ice and setting me free. We skated back along the edge of the lake until we returned to the majestic tree where our transformation began.

This was a Winter Wish tree—at least that’s what’s my father told me. If this tree held any magical properties other than the ones he granted it I will never know.

The tree was located by a small lake several mountain ranges removed from the small town of Cratersville where we lived.

We skated to a stop in front of its massive visage. With a wave of his hand my father adorned the tree with the finest holly day finery all glittery and bright.

As per our ritual, he asked me what I wanted for my Winter Wish. Now, this is a tricky question to ask a six year old, but my father had already prepped me with the rules that constrained what such a wish could contain.

Holding true to his clever coaching, I voiced a wish born of the stories he had been regaling me with ever since I could remember.

“I want to visit Earth,” I said, not knowing if Earth really existed or not.

“That’s a tall wish. What do you think you’ll find when you get there?”

I thought about it. If Earth really did exist, it wasn’t in the best shape when the last humans left taking their ark of animals with them.

“I want to see the stars. The real stars from the real Earth.”

He thought about it. I don’t think it was the answer he was expecting.

“You’re right,” he finally said. “The stars we have here are just an imitation of the ones there. I’m sure they pale in comparison.”

“Do you really think it exists?” I asked.

He crouched down beside me holding up a small charm.

I took it and held it in my hand. The charm looked like a miniature Earth with a little clasp on top.

“Put it on your bracelet,” he instructed. “One day, with the charm’s help, you may get to see Earth for yourself.”

“Every year, we will come to this tree. If you wish the same wish then one day your wish will come true.”

And this is what we did throughout the years until the last Winter Wish before I left the Icon Realm for good.

This last time, as we paid homage to the majestic sentinel, the decorations catching the winter light seem dimmer somehow as if the magic that had permeated them on all the previous occasions just wasn’t there. I thought, at the time, that this reflected my father’s mood over the loss of Poppy. I didn’t know that it was his ability to perform magic that was being diminished as a new magic formally started its ascent.

“Do you still believe,” he asked as we stood in front of the enchanted tree. Poppy’s birthday had just passed, yet there had been no Poppy there to celebrate.

I sighed. “Yes, because Poppy did.”

He managed a faint smile.

Neither Poppy nor I had cracked the code to visiting the real Earth, though we had managed to conjure a wondrous model with the charm’s help that allowed us to “eavesdrop” on Earth from afar.

I’m not sure if Poppy ever shared our discovery with him. So, I didn’t either.

We kept our secrets to ourselves just like he kept his from me.

It wasn’t until I entered the Creators Realm, the place of my birth, that the portal to Earth I had been searching for finally opened.

Of course, it couldn’t have been any other way. That’s why I had to keep on wishing. He knew I wouldn’t find it until after I fulfilled a promise he made on my behalf when I was too young to remember.

Now, from this place I was destined to return, I find myself standing in front of a visage of a majestic tree I created with the help of my Creation Book. The tree was small compared to the one that inspired it, though it was grand compared to the starry ceilinged room in which it stood.

Nori and I had bedecked the tree with the finest festive attire the night before. We centered the tree by the large front window of our quirky traveling house where the theatricality of it could shine.

If they do, I hope they make a wish. With a little magic, even in this oppressive Realm, maybe their wish will eventually come true as it eventually did for me.