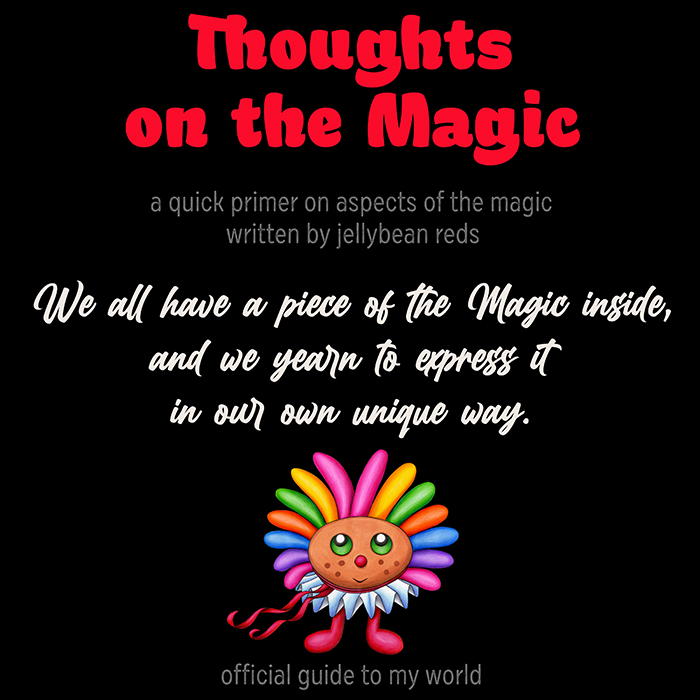 I’ve written about the Magic before, but since it is the reason why the Creators Realm and the Icon Worlds exist, I thought I would add a few more thoughts for you to play with.

I say thoughts instead of facts because I truly believe that the Magic, when you get down to it, is wholly unknowable. The main reason for this is that each of us experiences the Magic in a different way.

Some people, like my friend Blue, would prefer to live life as Magic-free as possible. To him, life is great without any ethereal happenings mucking it up. I totally get it. There are times I wish I could turn off my connection and live like any other secular-centered person but, being Bard excludes this option from my life’s repertoire.

Then there are those who worship aspects of the Magic as deity. Gods have always captured civilization’s imagination.

There are some who believe that this came about because of the power that deities have to socialize large groups of people into a somewhat manageable, cohesive organism. Damning people to eternal flames always seems to get their attention and make them take heed.

While this may be true, I believe that once a society becomes enlightened enough the fire and brimstone tactic doesn’t work very well because we all have a piece of the Magic inside, and we yearn to express it in our own unique way.

This is why I prefer to think of the Magic as a partner or lover instead of an oppressive overlord. I may struggle with the Magic, but I never let it become a tyrant that dictates how I view things, especially how I view others.

If each of us has a piece of the Magic inside then the only person who can truly dictate what we do or become is the person whose reflection we see everyday. I am the boss of me, just as you are the boss of you. Let’s respect that, for we all are part of the rainbow of life.

This brings me to how the Magic is used in my own Realm. Since it was a “covenant” with the Magic that allowed the Creators Realm to come into existence and the Icon Worlds to thus be created, the Magic still plays a prominent role in the rituals that are used in the creating process.

These rituals were devised by the Wanderlores in an attempt to constrain how the Magic was used so that its power wouldn’t be misused to the detriment of others.

Of course, as all things that involve humans go, those in power eventually learn how the system works and promptly discover loopholes by which they circumvent any restraints. This is how corruption happens in any system, be it political, religious or social club.

The result is that those not in power get abused. This, in turn, leads to cynicism, which results in people not believing in the Magic at all.

This, in my opinion, is the worst of all outcomes, because it means that people lose a vital connection to a piece of the Magic that we each have inside and the connection that allows us to chart our individual journeys in an ever-changing world.

The Magic is. It’s waiting to be discovered. Most of all, the Magic loves wonder, for that’s what makes life worth living.