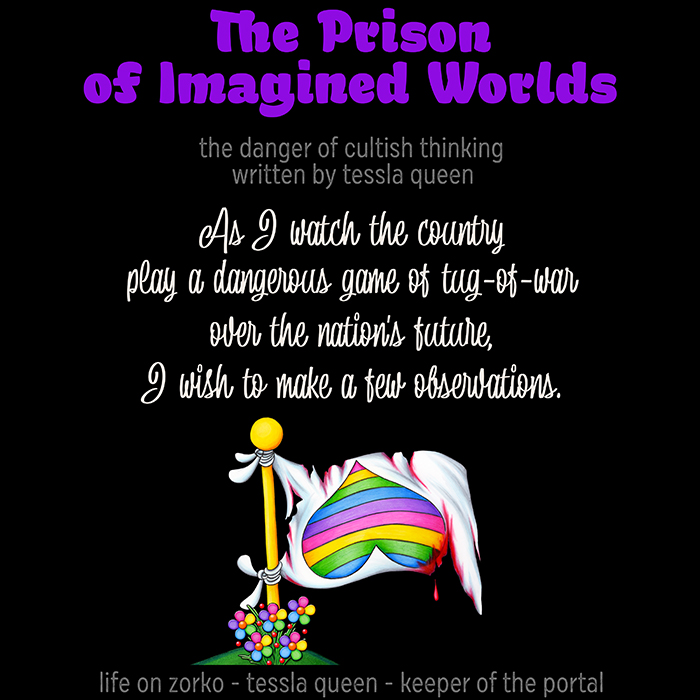 I struggled over who should write this post—me or my character Jellybean Reds. While Jellybean’s world is a great way to communicate about ideas without raising too many hackles, I believe that my life experience might be better utilized for what I have to say.

The first thing you should know about leaving cultish thinking is that it’s hard to recognize that this affliction applies to you. There are excuses and barriers to escaping this mindset—many of which are self-imposed. These are blindspots that we all have—a certainty of our own beliefs, the need to feel more special than others, the fear of losing a sense of oneself if we admit that the world is a lot bigger and more complicated than the small, ill-imagined spaces we construct in our minds.

As I watch the country play a dangerous game of tug-of-war over what they envision the nation should be, I wish to make a few observations.

Being from a cultish mindset I recognize the two sides that are being set up, and I know of the entrenchment and sorrow that will come.

One side earnestly wishes for past wrongs to be put right, they wish for those who are excluded from society to be included, they want a more equal and just society. While I believe in these views, I refuse to exclude everyone who believes differently than me from my life.

I do not suffer fools nor do I entertain evil people, but there is a difference between evil and what I consider unenlightened thoughts. I don’t have the right to make everyone believe the same way as me.

You don’t have to accept another’s point of view just because you listen to what they have to say. You can teach, persuade and even argue, but shunning entire groups of people for their beliefs, is cultish behavior that should be reserved for the true miscreants of a movement not for the mislead followers.

Now let me address those who fly the banner of liberty and freedom at all costs. Society is built upon the understanding that some freedom has to be sacrificed for the pursuit of the greater good. We don’t get to chose which stop signs to obey or ignore. We don’t get to decide to walk naked down the street no matter how personally uninhibited we may be.

To believe that freedom trumps everything is to be imprisoned by a false belief system. There is no wiggle room in the shackles you wear. Your beliefs shall keep you chained to a place you cannot leave, where you must worship a ghost of a Neverland of your own imaginations.

I say these things not because I actually expect to change anybody’s mind. I’m an empath and I realize that sides are already taken. I’ve seen the future of where all of this bitterness leads. I’ve seen it because it is part of my past. My greatest sadness is that it is about to become a part of your future.