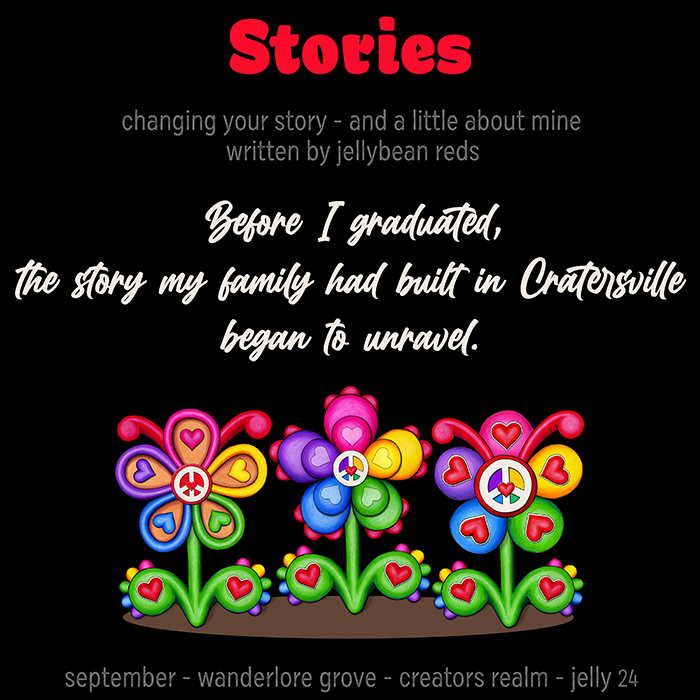 Stories can inspire us. They expose us to different points of view. The best stories touch our hearts and transform our souls.

Stories, despite the pleasure they provide, can be tricky to write—especially if they are your own. None of us start our stories fresh. Indeed, we all are born into other people’s lives, fully underway. Our parents too were born into already unfolding stories of the people who brought them forth.

As you can see, there’s a lot of stories going on at once and many times these stories have direct bearings on the script we will eventually write for ourselves.

It’s like being dropped into the middle of a play where you’re expected to somehow blend into the action without knowing fully the story you’re starring in.

I suppose I have a more complicated situation than most. Of course, I didn’t know how thorny my parent’s lives were when I was young. They never talked about things like that.

Perhaps, living in a town like Cratersville, which was built on a certain decorum that didn’t recognize a lot of strangeness, they felt that it would be unfair for my sister, Poppy, and I to have to deal with a back story that we really couldn’t talk about to anyone else in town.

This is how they decided to script their lives.

My sister, Poppy, started uncovering the intricacies of their pasts and what it meant for the two of us long before I did. She was younger than me by several seasons, yet her persona seasoned into maturity long before mine would.

We had different stories to tell.

In a way, I was glad that I wasn’t exposed to details I couldn’t do anything about. I was allowed to worry about nothing more than my grades, hanging with my friends, and the Magic that my sister and I discovered at an all too young age.

This Magic—the power to create little creatures—was plenty to deal with as it was.

Again, we didn’t know the entire story of how discovering this Magic would change our lives or how it was wrapped up in the stories of our parents and other family members we didn’t even know.

We had things to do and little creatures to create. We lived our lives. We wrote our stories as we went—word by word, sentence by sentence, chapter by chapter.

Before I graduated, the story my family had built in Cratersville began to unravel. The threads that made up my family tree proved to have more strands than I had allowed myself to imagine.

This truth haunts me still, even as it enlightens how I live my life.

We are all born into other people’s stories. The decisions on how they live their stories are mostly out of our control. What is in our control are lines we add to our own stories each and every day.

I discovered my magic early.

In many ways I am grateful for this, despite the complexities it added to the chapters I wrote in Cratersville where I grew up.

It kept me focused. It gave me purpose. Mostly, it gave me a tool that I could use to map out my own journey no matter how many twists and turns it took.

After I graduated, as I entered a Realm that would forever be my new home, I discovered even more tangles in the twisty tale I was born into. Decisions I had not made became storylines I had to live with and, somehow, weave into my own life. Nevertheless, I never lost sight of the fact that even though there were many new dramatis personae in my life— each with their own well-developed plots—I was still responsible for the lines I would speak and the actions I would take.

We are all born into other people’s stories. We can’t control the things that have played out before our individual entrances, though we do have have control of the lines that we deliver and the actions we perform before we take our exits.

We are all actors* born onto a very elaborate stage. There are many scripts being played out, many we may never truly know. It’s fun, exciting and infuriating all at once.

All I can say is…

*actors—when I use the term—includes all genders, just as I call myself a Creator, not a Creatrix. That’s my story and I’m sticking to it.