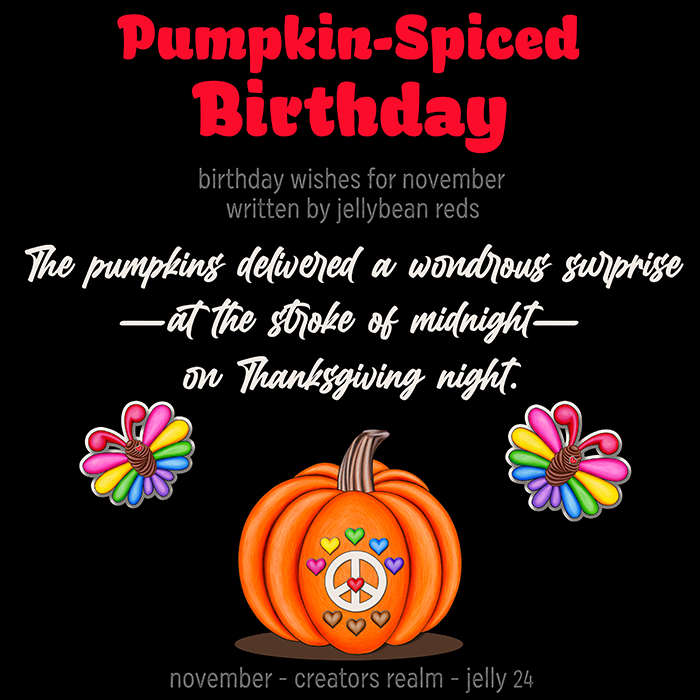 While I love pumpkin spice like everyone else, what I really love, when fall comes around, is spicing up everything in my life with winter squash and decorative gourds* of every kind—especially pumpkins.

I decorate the rooms of my boho-chic caravan with pumpkins—sometimes plain, sometimes accented with various symbols and other embellishments. I place a large autumnal display featuring pumpkins and gourds outside my front door. I place a smaller display on the alter I use for various seasonal blessings.**

Of course, I don’t limit my spicing to decor alone. I adore pumpkin bread not to mention cakes and pies. Speaking of pies, I will place a pie on my windowsill as an open invitation to stop and talk, by anyone daring enough to take me up on the offer. It’s my way of offering hospitality to those within the Wanderlore Groves while gaining insight into the life I’m still accustoming myself to. It also allows me to find baking partners for any future projects I’m planning on embarking on.***

Pumpkins also spice my memories of growing up in Cratersville. I don’t know what prompted Poppy and I to start our pumpkin escapades, all I know is that we thought that if an elegant coach can turn into a pumpkin at midnight then we can surely turn a pumpkin into something elegant (or surprising) which would be so much better.

We didn’t stop at one pumpkin either. With our Creation Books we could create as many pumpkins as we wished. We placed the pumpkins around town—at the front of shops, on the porches of houses, anywhere we could think of that wouldn’t draw too much ire of the local killjoys who detested the blatant propagation of illicit magical contrivances.

Not that we went about announcing what we were up to, but people naturally suspected we were up to something when we were out and about, especially when we were handing out pumpkins to perfect strangers like they were halloween candy.

Our special pumpkins decorated with stickers, glitter glue and little rainbow orbs stood like sentinels from mid-October thru the fourth Thursday of November. People smiled as they saw them—at least those who weren’t stick-in-the-muds. After several weeks on display, everyone decided that the pumpkins were innocuous and possibly worth keeping around just a little while longer.

That’s when the pumpkins delivered their surprise—at the stroke of midnight—on Thanksgiving night. Few were awake to see the transformation that our magic wrought on the pumpkins. But everyone saw the following morning that instead of pumpkins on porches and at store fronts there were small Winter Wish Trees decorated with ribbons, tinsel and little twinkling lights.

The season of pumpkins had given way to the season of holly and lights. Soon little creatures gathered around the magical trees. They sang funny songs about reindeer as well as songs of joy and redemption. People couldn’t help but congregate to partake in the good cheer…

As I conclude this very fond memory of autumns past, let me wish you a pumpkin-spiced birthday that leads to a holly day season of peace, love and much merrymaking with just a touch of magic sprinkled in.

You deserve it my gobble, gobble, great November babies!

*a little botanical clarification for all you city folk out there: gourds are mostly used for decorative purposes and because of their hard shells they can be used to create things such as musical instruments, bird houses, utensils and other decorative items depending on the type of gourd you’re talking about. Pumpkins are sometimes referred to as being a gourd, however this is a more informal designation. Pumpkins are actually squashes and squashes are mostly delicious though they can be used to create interesting centerpieces.

**I’ve incorporated many new practices into my magical repertoire since starting to live amongst the various Wanderlore tribes. Rituals and observances are shared amongst Wanderlores like favorite recipes, and like a new acquired recipe these rituals are personalized before being passed on again. I’m not really sure at this point how much any of our rituals are true to the original practices on Earth, but—like most rituals—the power comes from the focus and intention one gives to the ritual and to connecting with the Magic—everyone in their own way.

***Baking and me have a love/hate relationship. I find that having a baking partner limits the distractions that lead to overcooked eggs, scorched pots and burnt toast—especially if my baking partner knows what they’re doing. Having company also allows me to share my culinary productions while cultivating relationships with those I wish to know better.