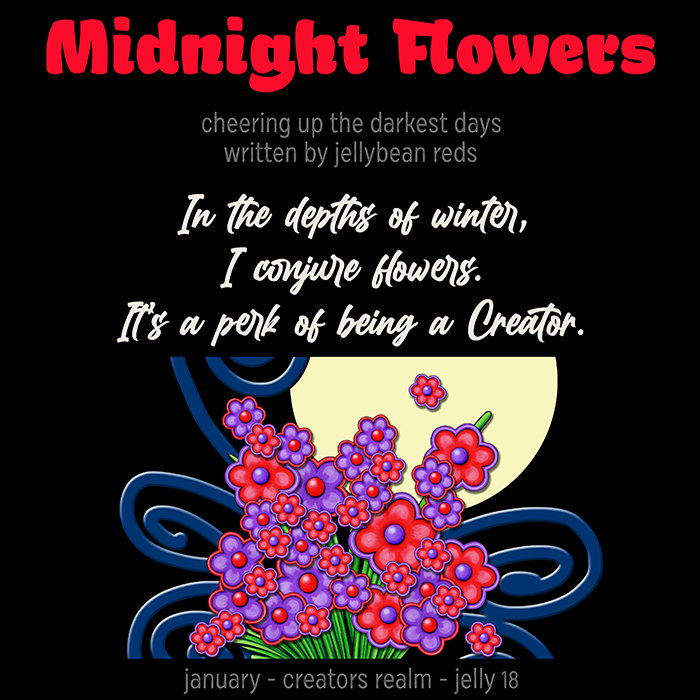 In the depths of winter, I conjure flowers. It’s a perk of being a Creator.

For those of you familiar with my world, you know that I live in a realm of techno-magical construct.

You might think, because of this fact, that planetary seasons would be of little consequence to life where I live.

When the Creators Realm and Icon Worlds were established, great care was taken to make these places as earth-like as possibly.

The Patrons, who rule the Realm, quickly found a way to create a more temperate climate for themselves while leaving everyone else out in the cold, figuratively speaking.

Despite this, I am truly attached to the seasons, which I have lived with all of my life—even though I was born into one of the climate-perfect houses of the Patrons.

I grew up in the Icon World of Red Rainbow Minor, which had a strong desert vibe at its heart but also experienced the four seasons as would be expected in less barren terrains.

Back in school, I learned how to hack the weather calendar in my hometown of Cratersville with magic from my Creation Book. I wasn’t trying for endless great weather, mind you, just something more along the lines of snowfall in July or mid-eighties on Winter Wish Day. Unfortunately, this only triggered the town’s ancestral memories of climate change, which precipitated humanity’s move to the stars in the first place.

When I entered the Creators Realm, I left my days of weather hacking behind. I came to understand more about why the Wanderlores wanted to keep the yearly cycle tightly bound to earth’s various climates and why they wanted to keep the weather variations as a way to remember what it was like to once be earth-bound.

I learned to appreciate having the control of the elements out of my control.

Sure, I’m affected by the mid-winter blues like many people, and I get more than a little giddy when I first notice the days getting progressively longer in the cold month of January. But, I know the winter is needed for me to truly appreciate the coming spring, just as the summer’s swelter makes me appreciate the cooling fall.

This is where my conjuring flowers comes into play.

I keep the script for my floral display in my Creation Book. I have several actually. Once the Holly Days are over, I launch a script that conjures a small scene in the corner of my bedroom, which will play every night until the first day of spring.

The flowers glow softly like a nightlight. There are stars surrounding the flowers that wink off and on as if their light were coming from lightyears away. Occasional a “full moon” will accent the scene, making the magical stars harder to see.

The flowers are the first thing I see in the morning and the last thing I cast my gaze toward at night. They represent the hope of spring no matter how cold and dreary the present may be.