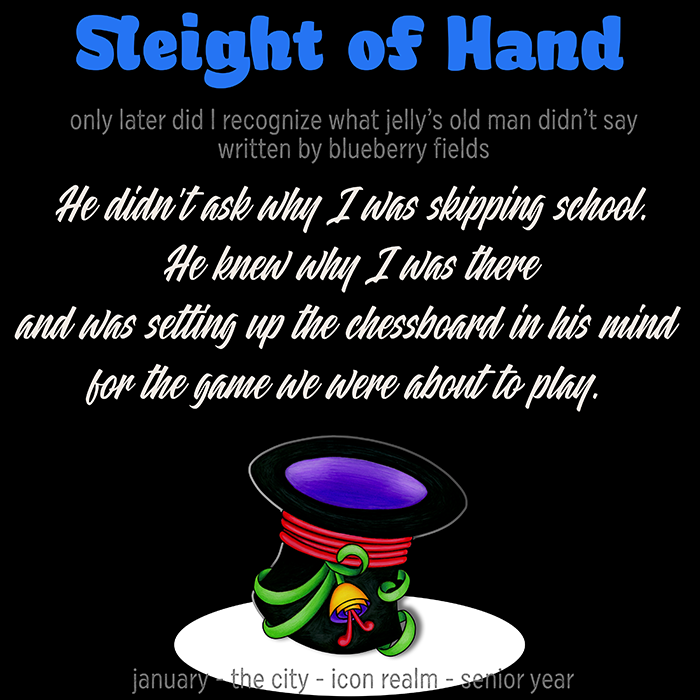 After the fire, everything changed.

Jellybean didn’t return to school. Their old man fled town taking his pretty assistant with him.

He went to the City. The big ritzy place where his other theater was.

Jelly’s dad always bugged me. He was a mind-fucker. A nod was the most he usually got from me.

Heck, if Jellybean couldn’t get a straight story out of him how could I?

The only reason that Poppy wasn’t a Grade-A Mushroom like her sibling was that she saw the future. This wasn’t a gift. She told me she would never burden Jelly with what she knew. It would be cruel. Everyone should get a chance to make their own choices.

Did Poppy have a choice when the theater burned?

Did Jelly have a choice being written out of the town’s memory?

I had questions. I knew I didn’t have a snowball’s chance in hell with getting a real answer. But, if I didn’t ask now, it would be never.

I went to the City and found the Great Razzle Matazzle’s theater. Poppy gave me a token to get in a few years back. She didn’t think I’d ever be ballzy enough to make the trip. Jellybean absolutely knew I would. That’s why I didn’t ask them for the charm. They wouldn’t be triangulated that way.

I found their old man. He was in his office. He didn’t ask why I was skipping school. It’s almost like he knew why I was there and was setting up the chessboard in his mind for the game we were about to play.

I sat down in a chair in front of his desk. I knew I would be dumped from the game early, but I carried on:

He chuckled. “You believe I will answer your inquiry?”

“Fuck,” I said, “I’ve been Jell’s friend forever. I figure I ought to know how much longer that’s going to last.”

He contemplated my move. “I believe you should be asking Jellybean that question.”

“I have. You know that. They have inklings not facts.”

“Jelly knows what they wish to perceive. Facts will not change their choices. Their story was written before they were born.”

That lit me. Everyone deserved their choices—especially Jellybean. I figured I might as well just tilt the board up now and be done with it. “So are you going to take your girlfriend back with you when you go?”

I expected him to blow up. He didn’t. He raised an eyebrow as if surprised by question.

Why the fuck was he throwing Rowan into this? Wait… “So, is Rowan Cinnamon’s daughter?”

“By ritual yes. She was born Fia’s daughter. Fia is Cinnamon’s pledge. Together, the four of us form what is called a Kin Clan. That is the Wanderlore Way.”

“So, are you a Wanderlore?”

“No, I am a Patron. Our arrangement did not fit well with what my ancestral house expected of me.”

“You were banished?” The image of him getting his ass kicked out of another realm humored me.

“We were not banished nor did we come freely. Our reasons make little sense from this side of the Portal.”

“So, when are you going back?”

He flinched. “Only one will return.”

I got up. There was nothing else I needed to know.