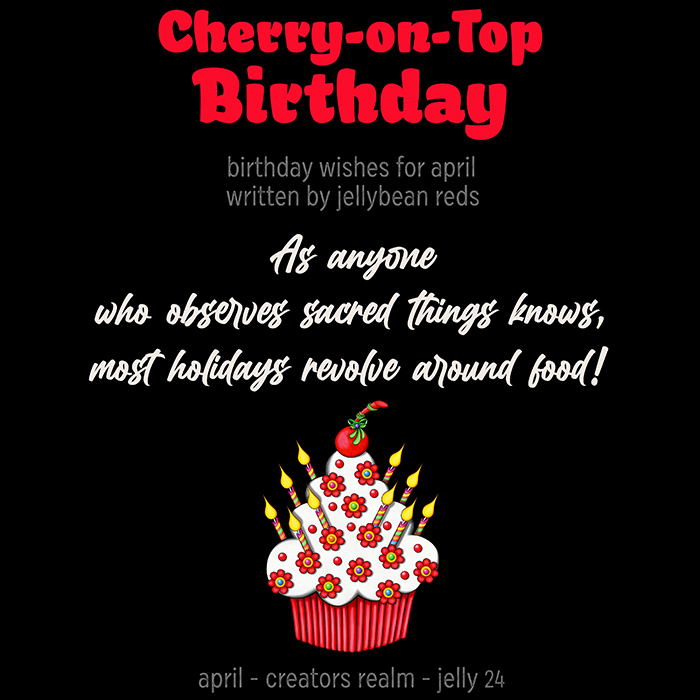 There’s a lot going on in your birth month. So, without further ado, let me begin the run down of this month’s happenings.

First up, we have April Fools Day. Now, if your birthday falls on April 01, I really feel sorry for you because people are going to spend all day trying to make you fall for one of their inane pranks instead of telling you how great you are. Don’t play the fool, line up a few pranks of your own. It’s your birthday after all. Why should they have all the fun?

Next up, we have National Peanut Butter and Jelly Day. Growing up, peanut butter and jelly was a lunch staple. It still is. Not saying that chocolate almond butter doesn’t reign supreme. Is there a National Chocolate Almond Butter Day?

National Find a Rainbow Day also falls in April. I, of course, would tell you that everyday is a great day to find a rainbow—even if you have to make that rainbow yourself.

National English Muffin Day, National Deep Dish Pizza Day, and National Grilled Cheese Sandwich Day all fall in April. I would say that food ends up having more holidays than religion does, but as anyone who observes sacred things knows they all revolve around food!

Fancy Hats and Baby Animals Day (aka Easter) and the Festival of Freedom (Passover) are the biggie holidays of the season.

National Blueberry Pie Day falls on April 28. I would say that I bake a blueberry pie for my best friend Blue on this day, but since I actually want him to enjoy said pie, I have his sister bake it on my behalf instead.

Speaking of Blueberry’s sister, I’m sure that she would want me to point out that April 30 is National Adopt a Shelter Pet Day. Adopt don’t Shop!

The last Saturday of April is National Go Birding Day. My sister Poppy wouldn’t let a day go by without striking up a conversation with one type of bird or another. If you speak “bird” let me know, sometimes I need a translator.

World Penguin Day is also observed in April. Do birds have more holidays than food?!!

That’s your April wrap. With so many fun things going on, just think how special it is to have YOUR birthday as the cherry on top!