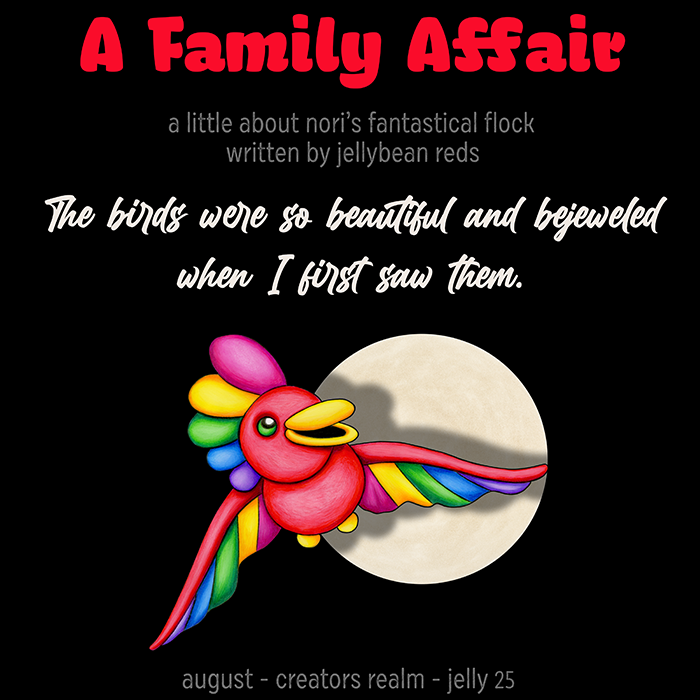 The tree haunted the corner of Nori’s Shop of Wonders. Sometimes it seemed cloaked in moody shadows. Other times the edges of its leaves glowed as if reflecting the light of a hidden sun.

The first night I noticed the tree, its limbs appeared twisted and gnarled. It was the Night Between the Worlds and Nori’s Shop was decorated in honor of the most spelltacular time of the year—at least for those who cared to celebrate the ancient Earth-centric holidays, which few in the Creators Realm did.

Nori was not from the Creators Realm, at least not in spirit. Nori was a Host. This meant that a majority of her memories and sentiments came from the previous lives she had lived—most of those years on the ancient Earth before the Great Dying.

According to the SolLuna Calendar, Nori’s current life in the Creators Realm clocked in at exactly one year. Yet, the age she celebrated was a combination of all of the ages she had managed to attain over her many lives.

“Seven Hundred and Sixty-Eight,” she said after I asked how many candles were on the humongous sheet cake she had baked to celebrate.

The cake appeared more like a flaming bed of nails than a celebratory confection. That’s what happens once the candles reach into the triple digits.

“You could have used those number candles. Then you would have only had three,” I observed.

“Jelly, what fun is that?” Nori replied. “Anyway, I have so many guests to feed. A three candle cake wouldn’t feed a finch.”

She mentioned finches, for the guests she was referring to were not human-formed but the exotic birds that inhabited the branches of the morphing tree.

The birds were eerie in their resemblance to the birds my sister Poppy used to create. I had been so excited after meeting Nori a few weeks earlier that the anniversary of Poppy’s entering the Realm Between the Worlds almost went by unnoticed by me.

The birds reminded me of Poppy’s life—and loss.

“What bothers you so, Jelly?” Nori asked.

I shrugged. “I miss my life back in Cratersville—I miss Poppy.”

“Yes, I miss my old lives too. They were better on Earth.” Nori motioned to the birds who crept closer to the candle-ladened cake laid out next to the tree. On the count of three Nori and her fantastical flock exhaled.

Pandemonium ensued as the birds tore into the cake.

Nori managed to rescue two sizable pieces from the fray—somehow without beak marks or scratches. It must be the luck of being the “birthday” girl.

“Here, you need something sweet for your sorrow,” she said.

This is why I liked Nori. She knew when to cheer me up and when to let me sulk. Tonight was Nori’s Rebirth Day as well as the Night Between the Worlds. This was time to celebrate.

I took a bite. This cake is delicious.

“Thank you,” Nori said. I’ll give you the recipe later.”

I almost choked. She had read my mind—just like Poppy used to.

Poppy maven of the birds…

“I was hesitant to be reborn,” Nori began, pulling me out of my thoughts, “especially in the Creators Realm. I had lived so many lives on Earth, why must I suffer to live in a strange place such as this. But, the birds were so beautiful unlike anything I’d ever seen.”

“So, the birds were your barter?” I asked. A barter being the thing offered to entice a soul to inhabit a Host’s body.

“Yes,” she said. “The birds were so beautiful and bejeweled when I first saw them.”

The birds did have a certain gemlike quality to them. I thought as I squished errant cake crumbs with my fork. This was Wanderlore Craft. You could see it when the light was just right—the clockwork from the birds creation before they were made real.

I didn’t enquire anymore that night about the birds or who created them.

We celebrated Nori’s Rebirth and the Night Between the Worlds until the early hours of the Day of the Dead.

As the seasons came and went, I got to know the individual members of Nori’s flock. Many went by more than one name.

Nori would switch between several languages when she talked to them. The birds would listen and reply with trills, whistles, gurgles, and other such sounds. Nori had to translate until I got the hang of their expressions.

There are Legends about how Hosts, since they are often placed in situations alone, will chose souls to accompany them on their journeys.

Companions can be friends from previous lives or mentors. Companions can also be family members. In Nori’s case, it seemed, she decided to bring the whole dang tree of ancestors with her.

By the time the next Night Between the Worlds rolled around, Nori and I were an “item”. To celebrate, Nori arranged to celebrate her Rebirth Day at the house that would become our new home*.

Like the Shop of Wonders, the “traveling house”, as she called it, had a tree in the corner of one of the rooms. This tree gave the house its magical ability to appear and disappear in different locations.

The tree also allowed Nori’s avian family to come and go as they pleased—a very appropriate feature for a magical house.

That was several years ago.

And, if you’re wondering who created the glorious bejeweled menagerie that contracted Nori’s soul…

If I had to venture a guess, I’d say that this bit of creative bribery happened at the hands of someone familiar to me.

In fact, I’d say that it was most certainly a family affair.

*This when we weren’t spending time in the Wanderlore Groves celebrating one of the many festival days that littered the year.