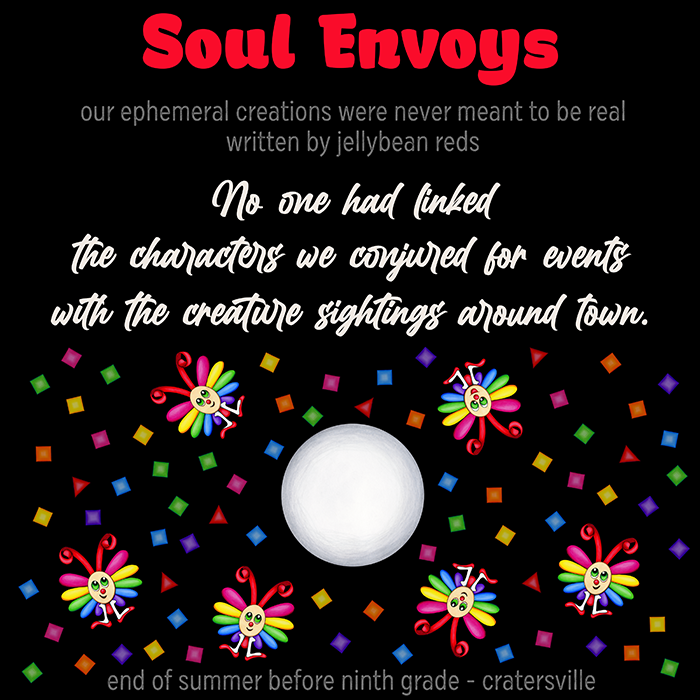 It was a warm August night, directly before the start of ninth grade. I was sitting on my bed, when I noticed a faint dusting of confetti landing on my pillow, the phantom remnants of another party that I had not been invited to.

The source of the confetti were tiny, rainbow-winged Flitter Zings flirting with a small celestial orb I used as a night light.

The orb, a tiny replica moon, was positioned above my bed, a watchful satellite against dreams of darkness. Known to the Wanderlores as the Eternal Clock, this faux moon mimicked the Earth’s crater-marred companion. Every Wanderlore had one, for by its phases, the festivals of the tribes were calculated.

The little creatures were born from the pages of my Creation Book. Once created, they were free to live as autonomous creations. I knew of their presence mainly from the reports of strange happenings around town. I rarely saw them in person or had a reason to interact with them.

The Soul Envoys were created for another purpose entirely. You see, after my sister, Poppy, and I discovered a powerful magic that allowed us to create little creatures we couldn’t help but use our newfound talent to wow the other kids at school whenever the opportunity arose.

Poppy was an attention seeker. She liked lighting up the room and being the center of attention. I didn’t. This didn’t stop me from enjoying the entertaining skits featuring fantastical creatures that we scripted for parties and other such celebrations.

But, these creations were never meant to be real like the little creatures and poppy monsters we created in secret. They were meant to show up, do a little entertaining, then vanish.

At this point, no one had linked the ephemeral characters we conjured for events with the creature sightings around town. This was a good thing. Creating real life wasn’t exactly an approved activity in the town’s decorum and living according to the town’s decorum was what every good denizen of an icon town such as Cratersville was expected to do.

Creating fantastical and fun characters however, especially if they were merely illusions, was surely not a problem—or so we reasoned. We did a lot of reasoning in those days.

However, what we couldn’t reason away was when the characters we created went off script and stirred up a bit more excitement than the hosts and guests were expecting.

This is when we knew we needed a way for the kids and townsfolk to make requests of the Magic directly instead of through us. Though Poppy was quick to diffuse angry parents, it didn’t help my stress levels.

Of course, like most of our musings, we didn’t get past noodling out the initial concept before our squirrel-like attention spans beckoned us to scurry off to something else.

We revisited our idea when the ephemeral characters we had been creating started appearing for other events we weren’t even connected with. Poppy’s connection to the town’s grapevine gave us early warning on this development.

Looking for a way to distance ourselves from any mayhem that these visitations might create, we came up with a ritual that would initiate the entertainment we scripted without us being present.

This way, the person throwing the bash would be looked at as the sole instigator of the magical event.

Our idea worked, though it didn’t stop the characters from having repeat appearances long after their premiers.

Soon afterwards, Poppy left me to manage the whole character request venture on my own. Her interests were changing as she spent more and more time immersed in things around the Wanderlore Grove.

This didn’t stop me from playing around with the Soul Envoy concept, but it did change how I viewed not only my relationship to the Magic but also everyone else’s.

If people’s wishes were making the characters turn into de facto little creatures, then I reasoned that people should make their desires known directly to the Magic without me playing liaison.

It’s not that I didn’t like to create things for other people’s celebrations, but somehow I felt a little guilty about keeping the joy of creating for myself.

That night, I let the Flitter Zings sprinkle me with the flecks of a disintegrating rainbow as I slowly fell asleep. I wondered if there really was a way for people to be able to connect to the Magic like me. If there was, I knew that it was an ability that I on my own could never grant.

By morning, the Flitter Zings were gone, but the scattering of confetti remained. I scooped up the confetti and put it in a jar with all the other confetti I had gathered throughout the months from previous elusive visits.

Throughout my travels, this magic-filled jar goes with me. It reminds me that despite the power I possess, the real magic of what I do resides not with me, but with the little creatures I create and with the souls of those in worlds I will never know.

*I didn’t understand until later that the magic the Soul Envoys were tapping into was actually that of the ascending magic not the ritual or established magic of the decorum that I used to create the eternal clock and other such devices.

Since I was a Bard, all such contrivances created by me existed outside of the old decorum and thus were able to be used to tap into the ascending magic by the little creatures and others such as them.

PrevPreviousThe Secret Language of Me
NextLife on ZorkoNext